The president of the European Commission has announced that the 27-nation bloc has now administered more than 300 million vaccine doses in the fight against Covid-19 and remains on track to inoculate 70% of adults by this summer.

In a tweet on Tuesday morning, European Commission President Ursula von der Leyen announced that the EU had hit another milestone in its fight against the Covid-19 pandemic.

Von der Leyen stated that more than 300 million vaccines had been administered across the bloc and that the inoculation program would continue at pace.

The figure means that around 45% of the EU population have received at least one dose. Vaccine tracker, Our World in Data, suggests that around 25% of Europeans are fully vaccinated against the virus with either two shots of AstraZeneca, Pfizer and Moderna, or one Johnson & Johnson jab.

The commission president added: “Every day, we get closer to our goal: to have enough doses delivered to vaccinate 70% of adults in the EU next month.” Von der Leyen had previously said that the EU would administer at least one dose to 70% of Europeans by the end of July.

The EU figure is substantially less than in the US and UK, and comes as China hit its own milestone in the fight against Covid-19.

On Tuesday, an update by the Nation Health Commission stated that 901 million vaccine doses had now been administered.

While impressive, China will need more than a billion more shots to fully inoculate its 1.4 billion people. To date, only around 62 doses have been administered per 100 people. Most vaccines being used in China require two doses. 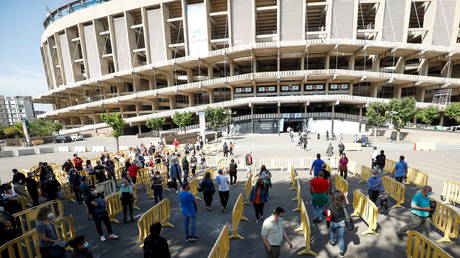