The EU’s executive has said that Turkey’s inability to maintain democracy and safeguard human rights remain barriers to its membership of the 27-member bloc. Ankara criticized the report as ‘far from constructive.’

On Tuesday, the European Commission released its annual report on the country, and in a summary warned that “accession negotiations have effectively come to a standstill.”

The scathing 115-page “Turkey 2020 Report” was published on Tuesday amid Ankara’s tense standoff with Greece in the Eastern Mediterranean.

“Turkey has continued to move further away from the European Union with serious backsliding in the areas of democracy, rule of law, fundamental rights and the independence of the judiciary,” a summary statement of the report read.

Ankara hit back at Brussels by saying the Commission’s report “reflects the EU’s biased, far from constructive, double-standard approach.”

“Our sincere wish is for the EU to look at candidate nation Turkey not through the narrow and selfish interests of some circles, but rather through our continent’s larger and common interests, common vision,” the Turkish Foreign Ministry said in a statement.

In its report, the Commission highlighted its “significant concerns” over Turkey’s crackdown on mayors in the majority-Kurdish southeast of the country over their alleged membership of the Kurdistan Workers Party (PKK) militant group.

Brussels said President Recep Tayyip Erdogan’s government had “seriously damaged local democracy” with the move, which saw “forceful dismissals of elected mayors in the southeast and their replacement by government-appointed trustees.”

The EU also cited Ankara’s handling of the failed military coup four years ago for its deteriorating relations with the country.

Amid its criticism, the report did acknowledge Turkey’s role in housing millions of refugees who have fled the Syrian Civil War, saying it “continued to provide substantial assistance to over four million refugees, out of which 3.6 million are Syrian.”

The EU, which is Turkey’s largest foreign investor, recently encouraged the country to engage in dialogue with Cyprus in a bid to ease tensions in the disputed areas of the Eastern Mediterranean.

It said Turkey had “continued illegal activities” in the area, describing its behavior as “provocative and aggressive.” Cyprus had been pushing for sanctions on Turkey if it did not cease oil and gas drilling in the resource-rich sea.

Speaking to Germany’s Angela Merkel, Erdogan “stated that the EU had succumbed to pressure and blackmail from Greek Cypriots and Greece despite Turkey’s well-intentioned approach,” the Turkish Foreign Ministry reported in a statement. 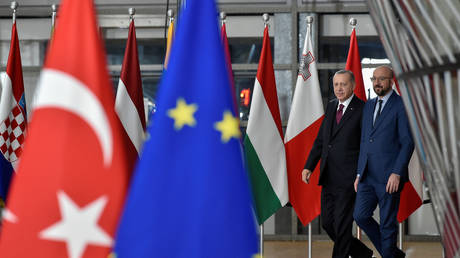 Surging yuan is one of the world’s...