The EU’s Commissioner for Home Affairs has called on Turkey to “deliver” on the migrant deal agreed with Ankara after meeting the UN’s High Commissioner for Refugees to discuss how to manage the situation across the bloc.

Speaking at a joint press conference with UN High Commissioner Filippo Grandi, the EU’s Ylva Johansson called on Turkey to deliver on the “still valid” deal “as it stands”, by preventing the departure of refugees travelling from Turkey into Europe, and accepting the return of migrants from Greece.

The EU official’s comments come amid ongoing discussions with the UN, member states and Turkey over how to resolve the issue of migrants trying to illegally enter European countries.

Over the weekend of May 8 and 9 alone, hundreds of migrants arrived on Italy’s southern island of Lampedusa in the hope of securing admission into the bloc.

EU and Turkey have been at loggerheads over the issue of migration, with each accusing the other of failing to uphold the agreement made in 2016 which would see Ankara prevent refugees travelling through Turkey into the bloc, in return for billions in aid.

Brussels has accused Turkey of simply allowing migrants to overflow from its nation into Europe, negating the agreement, whereas Ankara has argued they cannot cope with the growing influx of refugees with the initial aid provided anymore, having taken in three times as many Syrians as the whole EU.

There is currently no clear resolution on the issue, though the UN is calling for nations “to show solidarity towards Italy and to help in the situation” amid the influx of arrivals. 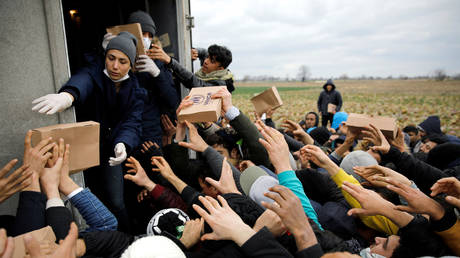