Ethiopia’s rebellious Tigray has acknowledged it launched strikes on an airport located in Asmara, the capital of neighboring Eritrea, accusing that country of aiding Ethiopia’s central government in its assault on the region.

Tigray’s President Debretsion Gebremichael acknowledged the attack on Sunday, confirming earlier reports of the strike. At least two projectiles hit Asmara’s airport late on Saturday, yet it was not immediately clear what, if any, damage was inflicted.

Gebremichael said the attack was retaliation for Eritrea’s alleged involvement in the Ethiopian infighting. The president claimed the region has faced “16 divisions” of Eritrean forces “on several fronts” for the past few days.

The attack on Eritrea was preceded by missile strikes on two airports in the neighboring Amhara region of Ethiopia. Tigray insists that Amhara’s troops have been actively participating in the federal government’s offensive as well, while the airports have been used to launch airstrikes on the rebel region.

Fighting broke out in Ethiopia earlier this month, when the country’s government launched an operation against the northern region of Tigray and its ruling faction, the Tigray People’s Liberation Front (TPLF). An alleged attack on a federal government military base, attributed to the TPLF, was used as pretext for the offensive. Tigray’s authorities, however, denied that such an attack took place. The TPLF used to rule the whole country for years, yet was forced to step down in 2018 after prolonged unrest that propped incumbent Ethiopia’s PM Abiy Ahmed into power.

Eritrea broke away from Ethiopia in the early 1990s following nearly three decades of war. The two nations fought another war shortly after, only reaching a proper peace deal in 2018. Abiy was even awarded the Nobel Peace Prize for this achievement and for his efforts in bringing “reconciliation” to the region.

Now, however, the Nobel-winning PM has come in for a storm of international criticism over the ongoing offensive against Tigray. The offensive, which Abiy promised to be carried out in a “limited” fashion and to restore the “rule of law” to Tigray, has already resulted in hundreds of dead and in mass displacement, while the rebellious region has repeatedly accused the central government of launching indiscriminate airstrikes on civilian targets.

More than 14,500 have fled the fighting into neighboring Sudan, with the UN warning more refugees were expected to arrive. The flow of people is already “overwhelming the current capacity to provide aid,” it has warned. 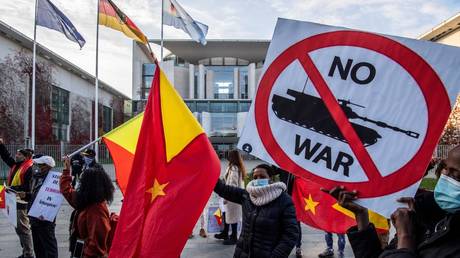