Federal forces in Ethiopia have surrounded the Tigray region’s capital, after the country’s government gave the Tigray People’s Liberation Front (TPLF) a 72-hour deadline to surrender.

If the TPLF does not surrender within that time frame, Ethiopia’s Prime Minister Abiy Ahmed has threatened to begin a military offensive on the capital, amassing tanks and armed forces in the nearby city of Mekelle.

Military figures had earlier told local media that anyone who chooses to remain in the city after the deadline has expired, without peacefully surrendering, will be shown “no mercy” when the assault begins.

Sharing a statement on social media over the weekend, Abiy defended the military action, arguing that it was necessary to “ensure stability prevails” and that “citizens are free from harm and want.”

The overall safety and well-being of the people of Tigray is of paramount importance to the Federal government and we will do all that is necessary to ensure stability prevails in the Tigray region and that our citizens are free from harm and want. pic.twitter.com/4u7NzfPZQ0

The Tigrayan government has not offered a response to the ultimatum, while international aid groups have expressed fear that the conflict will cause a humanitarian crisis in the country and surrounding parts of the Horn of Africa.

In the first two weeks of the conflict, hundreds were reportedly killed and tens of thousands were displaced, fleeing across the border into neighboring nations.

The United Nations refugee agency said aid support on the ground was at risk of being overwhelmed due to the sheer volume of refugees trying to escape the fighting. By last week, more than 27,000 people had already fled the fighting and crossed into neighboring Sudan, with the numbers rising to about 4,000 a day since November 10, according to a spokesman for the UN High Commissioner for Refugees.

The recent conflict is the latest escalation between Abiy’s government and the TPLF, who have refused to cooperate since his election as prime minister two years ago. After Abiy postponed national elections in June over coronavirus concerns, the TPLF declared his government illegitimate, with the PM responding in force, accusing the Tigrayans of being a rebel movement. 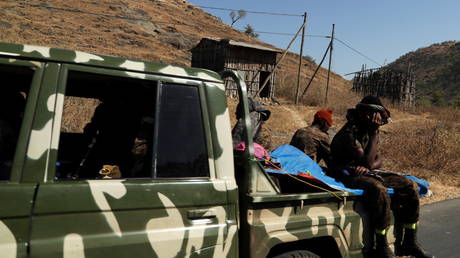