Turkish President Recep Tayyip Erdogan has threatened reprisals if anyone attacks the ship surveying disputed waters in the Mediterranean for oil and gas, after two French jets flew nearby during an exercise with the Greek fleet.

“We said that if you attack our Oruc Reis you will pay a high price, and they got their first answer today,” Erdogan said on Thursday in a speech in Ankara, without offering any details as to what might have happened.

The vessel, named after a 16th-century Ottoman pirate, started survey work earlier this week near the island of Kastellorizo, which belongs to Greece but is located near the southern coast of Turkey’s Antalya province.

French President Emmanuel Macron announced on Wednesday he would be sending additional military forces into the eastern Mediterranean in support of fellow EU and NATO member Greece. Macron also called for Turkey to stop the survey and resolve the issue with Athens through dialogue.

On Thursday, Greek media reported that two French Rafale jets flew over the Oruc Reis and its Turkish navy escorts, as they participated in joint exercises with the Hellenic Navy.

Limnos was the ship reportedly involved in a collision with the Turkish navy frigate Kemal Reis – one of Oruc Reis’s military escorts – on Wednesday morning. Greek media reported that the clash left several Greek sailors injured, but rendered the Turkish vessel “inoperable,” which Ankara denied.

Turkey and Greece last fought a war between 1919 and 1922, which ended in a mass exodus of Greeks from the present-day territory of the Turkish republic. In 1974, Ankara invaded Cyprus and backed a breakaway ethnic Turkish state, after the Cypriot government declared intent to unite with Greece. The island nation remains divided to this day.

Both Turkey and Greece are NATO members, but Athens is also a member of the EU, while Ankara is not. 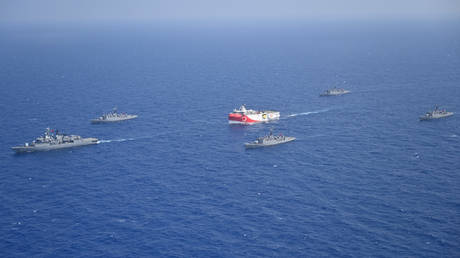