During a phone call with Russian President Vladimir Putin, Erdogan reportedly said Turkey “had responded in the strongest manner to the attacks Israel carried out recklessly against Al-Quds, Gaza, Al-Aqsa mosque and the Palestinians,” and that now it was time for the international community to also give Israel “a strong and deterrent lesson.”

Erdogan added that “it was important that the United Nations Security Council intervened in the matter before the crisis further worsened,” according to the Turkish Presidency’s Directorate of Communications, and “that the council should convey determined and clear messages to Israel on halting its attacks.”

Erdogan condemned Israel’s actions last week, after Israeli police attacked worshipers at the Al-Aqsa mosque compound in Jerusalem. He called the violence an “attack on all Muslims” and accused Israel of being “devoid of ethics.”

Following the attack on the mosque, and the threat of forced evictions of Palestinians from their homes in Sheikh Jarrah, tensions between Israel and Palestine have heightened, resulting in a back-and-forth of missile conflict, Israeli airstrikes leveling entire residential tower blocks in Gaza, and civilian deaths on both sides.

In a speech on Wednesday, Israeli Defense Minister Benny Gantz celebrated the airstrikes, declaring, “In Gaza, towers are falling, factories are collapsing, tunnels are being wiped out, and commanders are being assassinated. The IDF will continue to strike and bring complete silence for the long term.”

The armed wing of the militant Islamist organization Hamas, which governs Gaza, also issued threats, and called on Palestinians to “revolt” against Israel. 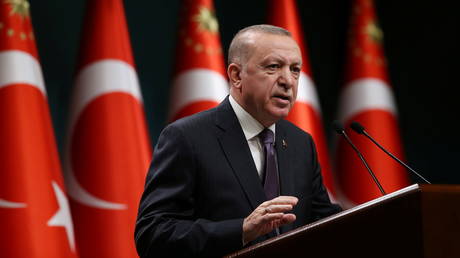