The historic Byzantine Chora church is returning to its role as a functioning mosque, having served as a museum for seven decades. Last month a similar reconversion was completed with Hagia Sophia, triggering backlash from Greece.

On Friday, Turkish President Recep Tayyip Erdogan ordered to transfer a historic church in Istanbul into the care of the Religious Affairs Directorate and opening its doors to Muslim worshipers. A similar reconversion happened a month ago, when Hagia Sophia, which also had originated as an Orthodox house of prayer, was turned from a museum into a mosque.

Turkish gov’t reverts 6th century Byzantine monastery Chora in Istanbul in to a mosque with a decree this morning.

Chora was built by the Justinian 1, the emperor behind the Hagia Sophia’s construction. It is known for its invaluable and stunning mosaics pic.twitter.com/NMyEPR5rLC

The Church of the Holy Saviour in Chora traces its history back to a fourth century monastery complex just outside of the wall of Constantinople, which was incorporated into the city as it expanded. The walls of the current building have survived since a major reconstruction in the 11th century. The interior features gorgeous Byzantine mosaics and frescoes, which were created sometime between 1315 and 1321 and depict scenes from the New Testament.

After Constantinople was conquered by the Ottomans in the mid-15th century, the church was transformed into a mosque and its Christian imagery covered behind plaster. Modern Turkey converted it into the Kariye Museum, a popular tourist destination, after World War II.

The Chora church in Istanbul, home to some of the most exquisite frescoes of Byzantine period, was converted to a mosque by the Ottomans in 1511. In 1958 after its frescoes were uncovered and restored it reopened as a museum. As of today it’s a full service mosque. pic.twitter.com/r7SQf9yrgX

The decision to return the museum to its Ottoman-era role was passed by Turkey’s top administrative court in November. It was not immediately clear how long it would take before Muslim services could resume at the site, after Erdogan’s decree was published in Turkey’s official gazette on Friday, thus coming into force.

Last month, Hagia Sophia underwent a similar controversial reconversion from a museum back into a functioning mosque. Erdogan, whose party courts political Islam for domestic and international support, attended the first Friday prayer held at the former Byzantine cathedral along with thousands of other worshipers.

The conversions have struck tensions between Turkey and its long-time rival and neighbor, Greece, which sees them as an attack on a Christian legacy held in Turkish custody. The Greek foreign ministry called the latest decision “yet another provocation against religious persons everywhere” by Ankara. 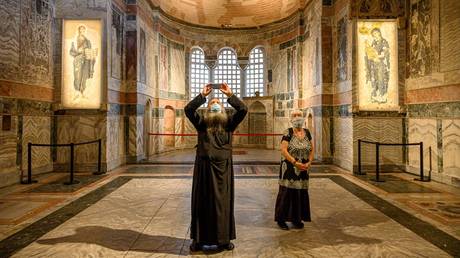