Turkey’s President Recep Tayyip Erdogan has criticized the EU over its restrictive treatment of the country after the bloc kept its coronavirus-related travel ban in place.

Erdogan expressed his concerns over what he said was the EU’s political stance toward the country while addressing members of Turkey’s ruling party AK on Wednesday.

His comments came after the EU excluded Turkey, along with the US and other countries, from its recent list of 15 states allowed non-essential travel to EU members from Wednesday.

According to the new EU agreement, member states will relax non-essential travel restrictions which were adopted in mid-March to contain the spread of Covid-19 to selected non-EU countries. Citizens from Canada, Morocco, Georgia, and another 11 states are now marked as “safe” for EU nationals to visit. The countries were chosen based on certain criteria, including that the number of new coronavirus cases recorded there over a 14-day period had to be “close to or below the EU average.” The countries listed also need to show a “stable or decreasing trend of new cases over this period.”

Countries that did not meet the outlined criteria and whose travel restrictions were extended include the US, Brazil, Russia, India, and Turkey. The EU has pledged to revise and update the list every two weeks based on epidemiological patterns in banned countries, as well as the governments’ general response to the virus and declining infection rates.

Turkey’s Foreign Ministry has condemned the decision, arguing that Turkish authorities managed to stem the outbreak successfully, and said that there was no “scientific reason” behind the travel warning against the state. The ministry urged the EU to “correct the mistake as soon as possible,” adding it was disappointed by the move.

Last week, the foreign minister said that EU governments intend to keep the flow of tourist funds within their domestic vacation markets out of economic interests.

Turkey is one of the most popular vacation destinations for EU nationals, after Spain and Italy. According to Turkish state media outlet Daily Sabbah, more than five million tourists visited from Germany alone in 2019, an 11.4 percent year-on-year increase.

According to coronavirus figures compiled by the Johns Hopkins University in the US, Turkey – with a population of over 80 million – has so far recorded 199,906 Covid-19 cases and 5,131 related deaths. Meanwhile, Italy with a population of 60 million and Spain with over 40 million, have each registered over 240,000 cases. Italy has suffered more than 34,000 coronavirus-related deaths, while that figure is over 28,000 in Spain. 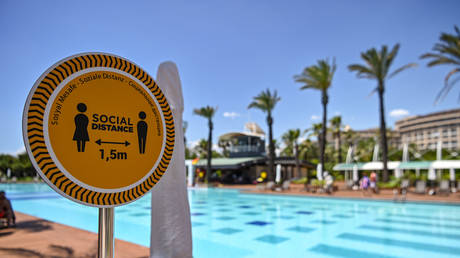