The boundless archaeological treasures of Egypt seemingly know no end as officials have announced an extraordinary trove of fresh discoveries, including at least 100 coffins and 40 gilded statues dating back to ancient times.

The incredible artefacts were unearthed in the vast Saqqara necropolis south of Cairo which served as a cemetery for the ancient Egyptian capital, Memphis.

An array of elaborate sarcophagi and statues were displayed in the shadow of the famous Step Pyramid of Djoser at Saqqara on Saturday.

At a press conference announcing the finds, Tourism and Antiquities Minister Khaled el-Anany revealed that the items date back over 2,5000 years to the Ptolemaic dynasty and the Late Period. The former ruled Egypt for some 300 years, from around 320 BC to about 30 BC, while the latter stretched from 664 to 332 BC.

As cameramen looked on, archaeologists opened a coffin to reveal a well-preserved mummy wrapped in cloth inside. They also X‐rayed the mummy to show how the body had been preserved.

The items will be spread out amongst at least three museums, including the Grand Egyptian Museum that Egypt is building near the Giza Pyramids.

El-Anany said that another discovery at the Saqqara necropolis will be announced later this year.

Saturday’s announcement is the latest in a series of archaeological finds in Egypt. The Saqqara site includes more than a dozen pyramids, ancient monasteries as well as ancient animal burial sites. The ruins are a designated UNESCO World Heritage site. 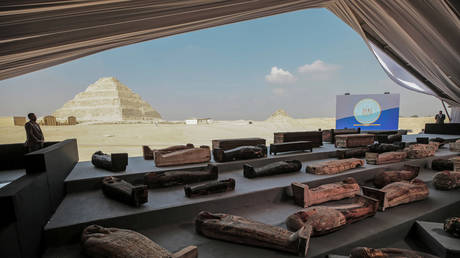