Ankara’s decision to carry out a seismic survey to the south of a Greek island in the eastern Mediterranean over the next ten days is a major escalation of tensions, Greece’s Foreign Ministry said on Monday.

The Turkish Navy issued an advisory late on Sunday announcing that the Oruc Reis ship would conduct a seismic survey in the east of the Mediterranean. According to a new Navigational Telex (NAVTEX), the Oruc Reis will carry out activities south of the island of Kastellorizo until October 22.

The move sees a return for the research vessel, which was recalled to Turkey in mid-September. At the time, the Greek and Cypriot authorities accused Ankara of having violated the countries’ continental shelf and maritime space for over a month.

The Foreign Ministry in Athens on Monday described the Turkish decision as a “major escalation and a direct threat to peace and security in the region,” which undermines efforts to ease a crisis over drilling rights in the eastern Mediterranean.

The withdrawal of the ship from the disputed area a month ago was seen as an opportunity for Athens and Ankara to begin dialogue to resolve their differences. Greek Prime Minister Kyriakos Mitsotakis said the move was a positive first step to ease tensions.

Greece wants the possible talks to focus on the demarcation of maritime borders, while Turkey is demanding that the countries discuss Greece demilitarizing its eastern Aegean Islands, which lie directly opposite Turkey’s coastline.

Ankara opposes Greece’s efforts to declare an exclusive economic zone based on small islands near Turkish shores. Despite pressure from the EU, the Oruc Reis will carry out seismic studies together with two other vessels, the Ataman and Cengiz Han.

Turkey has also claimed that energy resources near Cyprus must be shared fairly between the Turkish Republic of Northern Cyprus (TRNC) and the Greek Cypriot administration of Southern Cyprus. 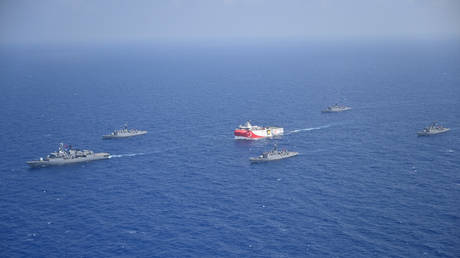