Protocols governing higher education in Hungary violate EU law, the European Court of Justice (ECJ) has ruled. The controversial reforms had forced a university founded by billionaire George Soros to leave the country.

The decision strikes down a Hungarian law passed in 2017, which stipulates that foreign-registered universities can only operate in the country if they offer academic courses in their home nations.

In its Tuesday ruling, the ECJ said that the condition was “incompatible with EU law” and breached the bloc’s Charter of Fundamental Rights, which safeguards academic freedom. The court had been asked to examine the Hungarian policy following a complaint from the European Commission.

#ECJ: The conditions introduced by #Hungary to enable foreign higher #education institutions to carry out their activities in its territory are incompatible with #EUlaw https://t.co/ATb3CgbPxg pic.twitter.com/LJ2xx8JqF8

The court’s decision comes amid a years-long feud between Budapest and Soros, who launched the Central European University (CEU) in Hungary in 1991. CEU offers US-accredited degrees but does not operate in the United States. The Hungarian government argued that CEU’s American accreditation gave it an unfair advantage over other institutions. Supporters of the university insisted that the rule had nothing to do with fairness but instead was an attack on academic freedom. The university announced in December 2018 that it would relocate to Vienna, Austria, claiming it had been “forced out” of Hungary.

Hungarian Prime Minister Victor Orban has been a vocal opponent of Soros’ philanthropic activities, claiming that the billionaire has a clear social and political agenda, most notably his support for open borders. In May 2018, the Hungarian-American businessman’s Open Society Foundations shut down operations in the country, citing an “increasingly repressive political and legal environment.” Bupadest also passed a “Stop Soros” law that imposes punishments on people who help illegal immigrants claim asylum in the country.

Orban’s government continues to lock horns with Brussels over a range of issues ranging from immigration to its treatment of Non-Governmental Organizations (NGOs). Last month, the Hungarian prime minister demanded the resignation of European Commission Vice President Vera Jourova, after accusing her of insulting Hungarians and calling their country a “sick” democracy.

Hungarian Foreign Minister Peter Szijjarto recently announced the creation of a joint institute with Poland that would monitor violations of law within the EU, after the bloc accused the two member states of legal malfeasance. The institute will help highlight “double standards” in how the bloc treats the law. 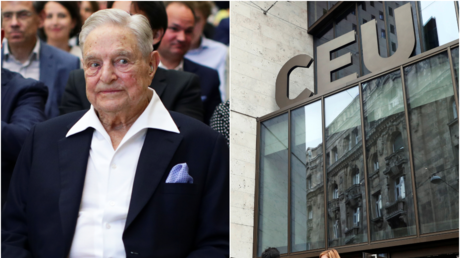 A star is born: Scientists capture...

We’re sinking on the ‘global finan...