Scientists have sounded the alarm over an Ebola-like virus from Bolivia which has been found to spread from person to person, killing three out of every five confirmed patients.

The rodent-borne Chapare virus first emerged in 2004 in the Bolivian province from which it gets its name, about 370 miles east of the country’s capital city, La Paz.

New research has shed light on the deadliness of the disease and how it spread from patient zero.

Following a 2019 outbreak in the country, researchers have found that, though it comes from a different viral family than Ebola, it also causes hemorrhagic fever, which can, in turn, cause life-threatening organ failure and bleeding.

At present, there is no treatment for Chapare outside of intravenous hydration and supportive care. The virus causes fever, headache, abdominal pain, rash and bleeding of the gums, and is believed to result from contact with rat urine or droppings.

Dr. Caitlin Cossaboom, an epidemiologist with the US Centers for Disease Control, presented findings from her research into a 2019 outbreak to the American Society of Tropical Medicine and Hygiene’s annual meeting on Monday.

A 65-year-old rice farmer was patient zero in the outbreak who then spread the disease to a 25-year-old doctor who treated him.

“The night before he died, she suctioned saliva from his mouth, and then she fell ill nine days later,” Cossaboom explained.

The 48-year-old paramedic who transported the doctor to hospital was the next to be infected after performing CPR on her.

A gastroenterologist conducted an endoscopy on the doctor and developed symptoms 14 days later. All of the cases resulted in exposure to bodily fluids from an infected person.

Patient zero, the doctor and the gastroenterologist all died from the Chapare virus, while the ambulance worker and another infected person survived.

The pygmy rice rat and the small-eared pygmy rice rat were found to be the primary carriers of the pathogen. They inhabit Bolivia and several neighbouring countries.

Scientists now worry the virus may have been circulating in the country for years with patients having been misdiagnosed with dengue fever, a mosquito-borne virus which cannot be transmitted from human-to-human, unlike Chapare.

The good news is that arenaviruses, such as Chapare, are vulnerable to both heat and disinfectants, which means that global spread is extremely unlikely. 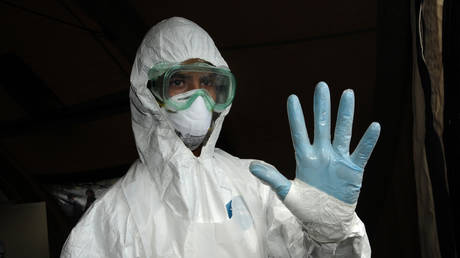