The Israeli military has pummeled the Gaza Strip for a fourth consecutive night. The air raids are said to come in response to explosive and incendiary balloon attacks by Palestinian militants.

At least three locations, including the Khan Younis port, were targeted by Israeli aircraft late on Friday. Drones, as well as several fighter jets, were spotted in the area, local media reported.

The sound of multiple explosions rocking the Gaza Strip could be heard in footage from the scene.

The Israeli military confirmed it was behind the attack, saying the strikes were a tit-for-tat response after explosive balloons were floated into Israeli territory.

As families in southern Israel enjoyed the weekend, a few miles away in Gaza, terrorists launched explosive balloons at them.

While the makeshift attacks, carried out using balloons or kites as weapons, rarely cause injuries or casualties, Tel Aviv says that they have damaged crops and sparked bushfires.

It’s the fourth consecutive night when the IDF targeted the Palestinian enclave, under Israeli blockade since 2007, each time citing Hamas activities as a pretext.

The flare-up comes against the backdrop of a US-sponsored deal to normalize relations between Israel and the United Arab Emirates (UAE), agreed on Thursday. While the pact was hailed by both Washington and Tel Aviv as a “historic” achievement, it sparked an angry reaction in Palestine and across parts of the Muslim world. 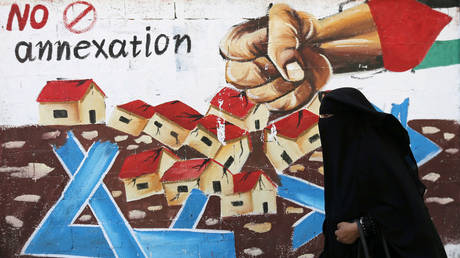