Some 90 people are believed to be trapped under rubble after a five-story residential building collapsed in a city south of India’s financial capital Mumbai. Around 30 people have already been rescued from beneath the debris.

The building in Mahad, some 200km from the city of Mumbai, suddenly collapsed on Monday afternoon. The whole structure has effectively been reduced to dust and rubble, with footage from the scene showing that the building fell into its own footprint.

At least 28 people have been already saved from the scene, according to local officials. Around 90 others, including children, are thought to still be trapped.

The collapse, which occurred amid heavy monsoon rains battering the region, triggered a major rescue operation, with emergency workers and local residents rushing to the scene to dig through the rubble. 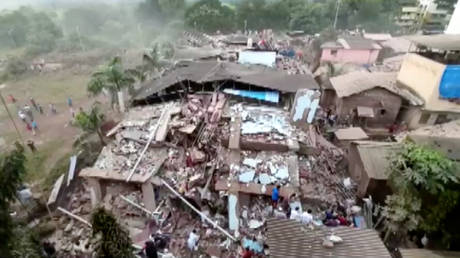