Beijing has urged US politicians not to use China to score cheap points before November’s election, lamenting that America’s leaders are conjuring up imaginary threats, including allegations of election interference.

The presidential contest is purely an internal affair in which Beijing plays no part, read a commentary published by People’s Daily, a mouthpiece for the Chinese Communist Party. The piece was published hours before the first presidential debate between President Donald Trump and Democratic Party nominee Joe Biden, and US policy towards China is likely to come up.

The strongly-worded analysis said that Washington was “concocting foreign enemies at the expense of America’s own interests,” and that the United States’ “biggest enemy” was itself.

Noting that China has become a central focus of both Democrats and Republicans, the commentary said that the preoccupation with the so-called “China threat” can be traced back decades but has become increasingly hysterical since the end of the Cold War.

Washington’s habit of using China as a scapegoat reveals how “American politicians in power today have shown a shocking desire for conflict,” the opinion piece concluded.

The Trump administration has locked horns with China on numerous issues, including tariffs, the situation in Hong Kong, and most recently on alleged security threats posed by Chinese-owned apps such as TikTok. Biden’s views on China don’t appear to be fundamentally different from Trump’s. In fact, the Democratic nominee recently ran a campaign ad accusing the president of being too soft on Beijing. Pundits have even speculated that Biden might keep Trump’s tariffs on China if he wins in November.

Beijing has been accused of working behind the scenes to influence the outcome of the November election. In August, the National Counterintelligence and Security Center claimed that China is pushing for Trump to lose the election, while Russia is allegedly trying to undermine Biden. 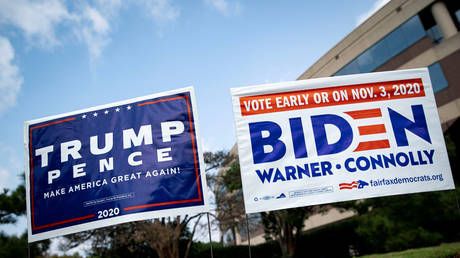