Close
Trending News
HomeWorldDo they look alike to you? NBC roasted for photo of actor KEVIN HART on story about athlete USAIN BOLT

Do they look alike to you? NBC roasted for photo of actor KEVIN HART on story about athlete USAIN BOLT

Do they look alike to you? NBC roasted for photo of actor KEVIN HART on story about athlete USAIN BOLT

Hollywood actor Kevin Hart and Jamaican sprinter Usain Bolt look nothing alike, so you can imagine the shock and amusement when a photo of one appeared in an NBC News tweet about the other testing positive for Covid-19.

Rushing to break the news that Bolt, 34, had tested positive after a mask-free birthday bash last week, NBC tweeted it out with a photo of the 41-year-old actor instead.

We tried to take a photo of Usain Bolt but he was too fast so here’s Kevin Hart. pic.twitter.com/LIAz34QaTb

The visual gaffe prompted quick and merciless reactions from the public, who wondered whether Bolt was just too fast for photos – or marveled at how the 6’5” (1.95m) Jamaican could be mistaken for a much shorter (5’4”, or 1.62m) American actor.

Among other things, there’s about two feet of difference between Usain Bolt and Kevin Hart. pic.twitter.com/BRwIt1AUTx

Some even accused the network of being “utterly racist” because the only thing Bolt and Hart have in common is the color of their skin.

Hey, @NBCNews, did you post a photo of Kevin Hart with an article on Usain Bolt because you believe all black people look the same? This is utterly racist. pic.twitter.com/FddDOJhCmV

In a correction appended to the article nearly three hours after publication, NBC insisted that a “technical problem” caused the photo of Hart to appear in the tweets, and it was fixed when they uploaded a photo of Bolt.

It appears the original breaking story may not have had a cover photo, so Twitter defaulted to the photo of Hart from the inset related story instead. The actor revealed earlier in the day that he also had a bout with Covid-19.

Bolt, the world record-holding sprinter and winner of eight Olympic gold medals, said he was not experiencing any symptoms and was self-quarantining at his home in Jamaica “just to be safe.” 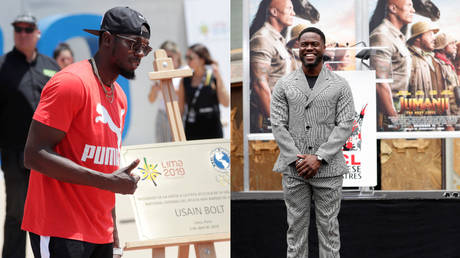