Videos posted online show the chilling moment a young protester falls to the ground during clashes with police in Belarus. His death has sparked outrage across the country grappling with post-election protests.

A clip first released by AP shows police officers in full riot gear lined up on the street. A man in a bloodied white T-shirt, who was believed to be Taraikovsky, collapses on the ground.

Protester, Alexander Taraikovsky falls during clashes in #Belarus on Monday. His funeral was held today in #Minsk pic.twitter.com/4O1XdMB3ry

Videos filmed from other angles and published in local media show the same man approaching the officers with his hands up in the air. He then falls to the ground after one of the officers appears to fire a projectile in his direction.

Authorities claim that Taraikovsky died after being injured by a home-made explosive device he allegedly tried to hurl at the officers. His wife Elena German told the media that she believed Taraikovsky was fatally shot by police.

German, who confirmed that Taraikovsky was the man in the videos, told AP that she saw what appeared to be a wound to his chest when she saw her husband’s body in a morgue on Friday, while his hands and feet were “completely intact.”

Activists and some media outlets insist that the now-released footage debunks the allegations that Taraikovsky had a bomb, because the available clips do not show him holding anything in his hands.

Thousands attended Taraikovsky’s funeral procession on Saturday, bringing wreaths and flowers, and carrying Belarus’ historic white-red-white flags that are being widely adopted by the opposition.

Lukashenko, meanwhile, has argued that the protests were incited by foreign protagonists wishing to destabilize the situation in the country. 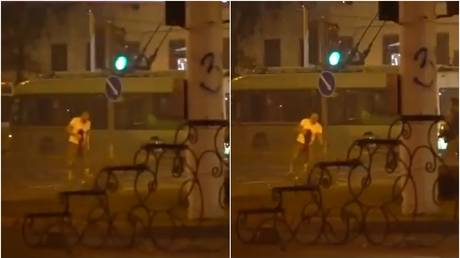 Belarus’ Lukashenko to move air as...