In a bid to avoid overcrowded refugee camps a family of refugees in Syria has set up home in the ruins of a Roman temple of the ancient settlement of Baquirha in the north of the war-torn country.

Abdelaziz al-Hassan, his wife and three children fled their home in Idlib last winter after a series of attacks on the city.

They now live in a tent village, pitched at the second-century temple of the ancient local god Baal, also called ‘Zeus’ in Greek mythology. “I chose this place because it provides peace of mind, far from overcrowded places and those riddled with disease,” al-Hassan told the AFP news agency, later mentioning the site’s relative safety from the Covid-19 pandemic.

“Two days ago, near the tent’s opening, I killed a viper,” the man revealed, adding, “every other day, we have to kill a scorpion. … But we haven’t found anywhere better than here yet”.

The family has set up a long tent as their house, it just fits in-between the temple’s three standing walls. In front of it is another big open tent, with a line strung across two of the temple’s half-destroyed columns to dry laundry on.

Outside there is an electricity source – two solar panels, with a cord leading to an industrial-looking fan inside the tent.

The small cooking stove the family has, however, runs on firewood.

Syria has many such historic structures built by the Romans, Byzantines and even European Crusaders. Al-Hassan and his family aren’t the only refugees living in Baquirha, as the near decade-long civil war between the Syrian government and the nation’s different domestic and foreign elements has displaced millions of people. 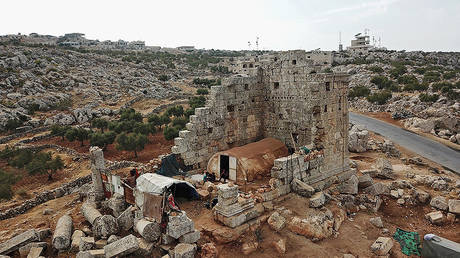