Kanye West has unveiled his vision for a Christian alternative to the popular video app TikTok, calling on the lord himself to help make ‘Jesus Tok’ a reality while inspired netizens met the idea with an outpouring of memes.

“A vision just came to me… Jesus Tok,” the rapper tweeted on Monday. “I was watching TikTok with my daughter and as a Christian father I was disturbed by a lot of the content but I completely loved the technology.”

We pray we can collaborate with Tik Tok to make a Christian monitored version that feels safe for young children and the world. In Jesus name amen.

The visionary proposal found instant converts, producing a wave of suggestions for Jesus-themed content the new platform might feature – some of them perhaps not as kid-friendly as the entertainer had in mind.

Me & the homies once Jesus Tok pops off pic.twitter.com/0SKGqu116F

The Alpha and Omega himself – or at least a parody account under his name – also weighed in on the idea favorably, while others theorized what TikTok video could have left Kanye so “disturbed.”

.@kanyewest loving Jesus Tok so far Ye thanks for the idea here’s this dance I came up with ❤️ pic.twitter.com/zEauCt0k0l

I think Kanye saw this and was like “Nahhh enough is enough”… pic.twitter.com/hzW1epXJoA

While many were delighted by the suggestion, some netizens argued the awkward name could still use some work, offering several alternative ideas.

Lol someone said not Jesus Tok but call it DiVine 😩😩😩😩😩

Instead of Jesus Tok , you should call it CrissCross. It is trendy, sounds cool, and the cross could mean Christian! @kanyewest hit me up! Just some kid from lubbock that majored in marketing trying to make it on YouTube #JesusTok #TikTok #KanyeWest 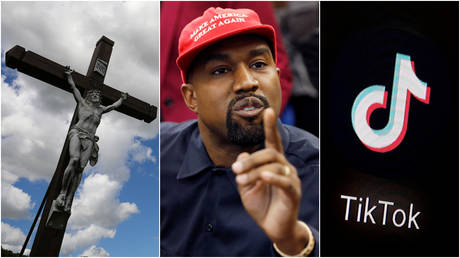