Deputy mayor wants Paris back under 3-week lockdown, despite opposition

Deputy mayor wants Paris back under 3-week lockdown, despite opposition

Paris Deputy Mayor Emmanuel Grégoire has said that his administration will likely place the French capital under a harsh three-week lockdown to curb Covid-19, and he doesn’t care what President Emmanuel Macron thinks.

A curfew is currently in place in Paris to slow the spread of Covid-19, but Grégoire said it’s “not enough to settle the curve.” Speaking to France Info on Thursday, Grégoire said that his administration will propose a total lockdown of the capital next week. Mayor Anne Hidalgo will issue the proposal.

“We must now make courageous decisions,” he said, adding that a lockdown “is the only solution.”

Parisians have already been hit with two national lockdowns, and an ongoing nationwide curfew, as well as a raft of localized restrictions. Across France, the rules to combat Covid-19 now vary from region to region, with Nice and Dunkirk entering weekend lockdowns on Friday. Grégoire dismissed the idea of implementing a similar policy in Paris, calling such semi-lockdowns “extremely restrictive without being effective.”

His idea has its opponents. Geoffroy Boulard, mayor of the city’s 17th arrondissement, told BFMTV that he was “very stunned” by Emmanuel’s proposal, while councillor Danielle Simonnet stated that “there are alternatives to confinement,” suggesting that social life be managed “by rotation.”

Grégoire’s plan apparently goes one step further than that of Prime Minister Jean Castex, who suggested earlier on Thursday that weekend lockdowns could be implemented in Paris if the disease continues to spread. Macron, however, has opted not to subject France to a third national lockdown, preferring to delegate the decision to individual regions.

The deputy mayor told France Info that he disagrees with Macron’s no-lockdowns policy, and will not have his mind changed by the president’s stance. “The will of Emmanuel Macron is not a sufficient scientific health argument to convince me,” he said. 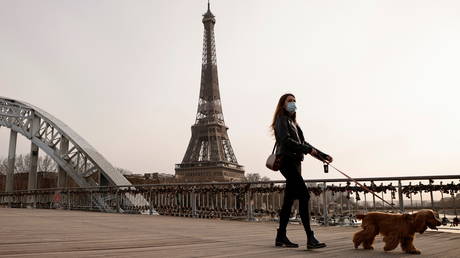