Every household in Delhi will be tested for Covid-19 by July 6, following the biggest single-day jump in new cases yet. The plan is similar to mass-testing used by China after an uptick in infections in Wuhan earlier this month.

Delhi Chief Minister Arvind Kejriwal’s government announced the new Covid-19 response plan on Wednesday. Under the new guidelines, city authorities will “screen” every house in the Indian capital over the next 12 days to see how far the virus has spread.

CCTV cameras will also be used to monitor the worst-affected neighborhoods and to strengthen surveillance methods across the capital. Public officials, local epidemiologists, and IT professionals will monitor the central government’s Aarogya Setu contact-tracing app.

The new strategy comes as Delhi, with a population of between 18 and 20 million people, reported a spike of 3,947 new infections in 24 hours on Tuesday, the steepest daily increase registered by any Indian state so far, bringing the total cases there to 66,602, with 2,301 deaths.

Officials were pushed to revise their containment strategy after the Indian supreme court called the situation in the capital “horrendous, horrific and pathetic.”

On June 21, Minister of Home Affairs Amit Shah had advised the Delhi administration to send all coronavirus patients in densely populated areas to Covid-19 care centers, allowing those who have necessary self-care facilities or who are suffering from other diseases to isolate at home. That decision was met with criticism from Deputy Chief Minister Manish Sisodia, who said that the new order was confusing, at odds with Kejriwal’s plan and puts unnecessary pressure on the health system.

India’s attempt to ramp up mass-testing follows China’s move to test 10 million residents of Wuhan over 19 days in a bid to prevent a second wave of infections.

As of June 24, India’s coronavirus tally stands at 456,183 cases and 14,476 deaths, making it the fourth worst-hit country in the world, according to data released by the federal Health Ministry. 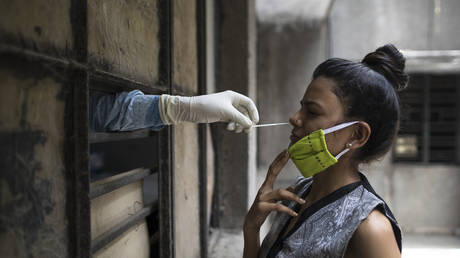 US considering imposing billions i...

McDonald’s SPIES on its employ...