Decision to strip Assange of Ecuadorian citizenship hasn’t come into force, his lawyer tells RT, while preparing an appeal

Decision to strip Assange of Ecuadorian citizenship hasn’t come into force, his lawyer tells RT, while preparing an appeal

The court ruling to nullify the WikiLeaks co-founder’s status as a naturalized Ecuadorian citizen was the result of an orchestrated political trial and must be overturned, Carlos Poveda, Assange’s lawyer, told RT.

An administrative court in Ecuador decided on Monday that Assange should be stripped of his citizenship due to unpaid fees and what they claim are numerous inconsistencies in his application for naturalization. But Poveda insisted that the ruling “can’t be considered final yet” as he going to appeal it.

Assange’s attorney believes that an appeals court has more than enough grounds to overturn the “shameful” decision because his client “was deprived of his right to defend himself,” and “the evidence wasn’t examined properly.”

Assange, who is now being held in Belmarsh maximum security prison in the UK, obviously couldn’t travel to Ecuador, but the administrative court denied the request for him to take part in the trial via video link and present the proof he had, his attorney said.

The WikiLeaks founder has always denied the claims, and his supporters insist that he was persecuted for his journalistic activities, which included the publication of numerous classified US documents on Iraq, Afghanistan, and Guantanamo.

The publisher “had a legal right for naturalization [in Ecuador] because he was under international protection at that moment,” Poveda said. In April 2019, British police officers entered the Ecuadorian Embassy and arrested Assange over accusations of breaching bail. He has been in Belmarsh Prison since then and recently celebrated his 50th birthday behind bars.

The ongoing trial, which Poveda says is political, indicates that an “independent justice system is lacking in Ecuador” and “gives a bad name” to the country.

The WikiLeaks co-founder is wanted on espionage charges in the US and could face up to 175 years in prison if extradited.

In early 2021, a UK judge denied his transfer across the Atlantic, citing Assange’s poor mental health. But the UK High Court recently granted Washington permission to appeal the decision, despite increasing public calls to release him. 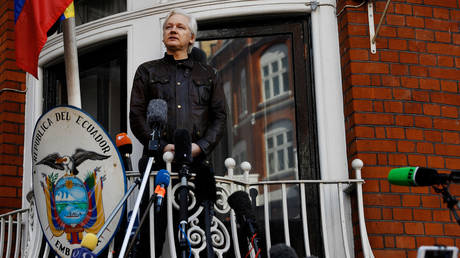