Close
Trending News
HomeWorld‘Deaths’ during attack on head of public security in Mexico City, but official ‘out of danger’

‘Deaths’ during attack on head of public security in Mexico City, but official ‘out of danger’

‘Deaths’ during attack on head of public security in Mexico City, but official ‘out of danger’

At least one person has been killed in a shooting attack in a wealthy neighborhood of the Mexican capital housing many diplomatic residences. The assault had targeted the city’s top security official.

Heavy gunfire has been heard in the Lomas de Chapultepec area – one of the wealthiest neighborhoods in the west of the capital. The target was the city’s public security chief, Mayor Claudia Sheinbaum said in a tweet.

The security official, Omar García Harfuch, has been injured and is now being treated in hospital, she said, adding that his life is “out of danger.” The mayor also confirmed that there were “deaths” and arrests following the incident, but did not go into any more detail.

Photos and videos circulating on social media also show a large police presence at the scene. Local media is reporting that at least one person was killed and seven were injured in the attack. Mexico’s Attorney General Ernestina Godoy Ramos said that 12 suspects have been detained following the attack.

The city Secretariat of Public Security (SSP) has so far confirmed that two police officers were injured in the firefight. According to media reports, three of Harfuch’s guards were also wounded. A number of rifle-type guns were seized at the scene.

Harfuch is said to have been heading to a regular security meeting with Sheinbaum when he was ambushed. Mexican President Andres Manuel Lopez Obrador linked the attack to the law enforcement efforts to establish law and order in the city. 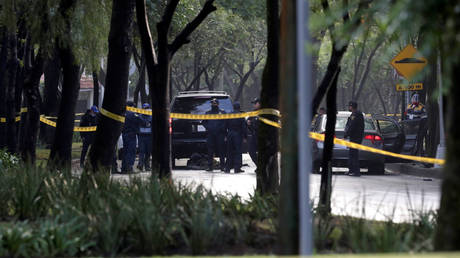