Covid-19 has claimed many lives, but the deadly illness now appears to be responsible for a plane crash that killed 97, according to Pakistan’s aviation minister, who said the pilots were too busy talking about the virus to focus.

A Pakistan International Airlines flight crashed in Karachi on May 22, when it landed short of the runway on its second attempt, killing all but two on board, and causing damage to dozens of homes. It appears the pilots were so engrossed in chatting about Covid-19 that they disregarded “several warnings and alerts” about speed, ground proximity and the landing gear not being down, an initial inquiry report has revealed.

The devastating crash happened just days after Pakistan had resumed flights, having halted all air travel in response to the pandemic.

“The discussion throughout was about corona,” Pakistan’s aviation minister, Ghulam Sarwar Khan, told the National Assembly on Wednesday. “Corona was dominant over their mind – their family was affected.”

The Pakistani investigation team, which included officials from the aviation industry as well as  the French government, analysed data and voice recorders and found it was human error that had caused the tragic crash. French representatives from Airbus, the manufacturer of the airplane, and engine maker Safran supported the Pakistani-led inquiry into the crash. The report did not detail the specific contents of the pilots’ conversation, but said they did not follow protocols, Reuters reports.

When air traffic control told the pilots the plane was at the wrong altitude to be making a landing, one replied, “I’ll manage,” and returned to discussing the pandemic, the minister said.

The Airbus A320’s engines hit the runway on the first attempted landing. On its second attempt, the plane crashed into a residential area half a mile from the airport. The disaster happened on the eve of the Muslim festival of Eid, when many Pakistanis travel to visit relatives.

Shocking CCTV footage of the moment the plane went down showed it exploding into a massive fireball as it hit a building in the densely populated neighborhood. It crashed tail-first and injured eight people on the ground, one of whom later died. 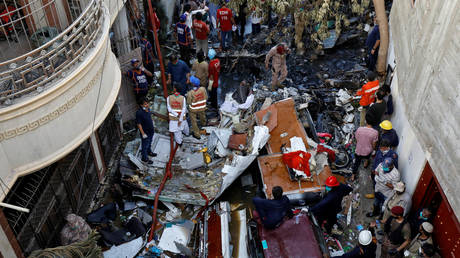