Danish ice cream maker Hansens Is will rebrand its ‘Eskimo’ desserts over apparent racist connotations, following complaints by a politician from Greenland. The move was met with mixed reaction online.

“After much thorough reflection, we have decided to give our Popsicle ‘Eskimo’ a new and more appropriate name,” Hansens Is said in a Facebook post, citing the ongoing global debate over “derogatory treatment and inequality towards minorities and indigenous people.”

The company has opted to call the chocolate-coated vanilla treat “O’Payo,” the name of the chocolate used in making the dessert. According to the social media statement, the offensively-branded sweets will remain on sale until the “warehouse is exhausted,” at which point the politically correct packaging will appear.

The decision was made after Aaja Chemnitz Larsen, a politician representing Greenland in the Danish parliament, claimed the term means “eater of raw meat.”

“Eskimo has a pejorative meaning for many Greenlanders. So I think it is only natural to show this level of respect for us,” Larsen said. Greenland, a former Danish colony-turned province with a high degree of autonomy, boasts some 55,000 mostly Inuit inhabitants.

“Didn’t know Eskimo was condescending… I think it’s discrimination against me to change history to make others happy… so no more Hansen ice cream in my freezer,” wrote one clearly upset Facebook user.

“The story doesn’t go away because you stick your head in the bush,” added another.

One commenter cited the 10,000+ ‘angry’ reactions to the Facebook announcement as an indication of how poorly the decision was received by fans of the frozen lolly, to which a fellow Dane pointedly responded: “F**k the ordinary Danes’ attitude about something that isn’t about them.”

In mid-June, Dreyer’s Grand Ice Cream changed the name of its ‘Eskimo Pie’, which had been on sale since 1920, to avoid offending any Arctic peoples.

However, Danish ice cream maker Premier opted not to bend the knee to the PC brigade and said it would keep its ‘Kaempe Eskimo’ (Giant Eskimo) ice cream name.

“But we do not see at all that the name is associated with racism and may offend anyone. It is, in turn, a name associated with nostalgia,” Premier Is Director Claus Dahlmann Larsen said.

The debate echoes similar controversies elsewhere, with a number of companies opting to change well-known brand names and logos, such as Uncle Ben’s rice, Aunt Jemima’s syrup and many others, amid the groundswell of anti-racist sentiment in recent months, following the death of George Floyd in Minneapolis police custody. 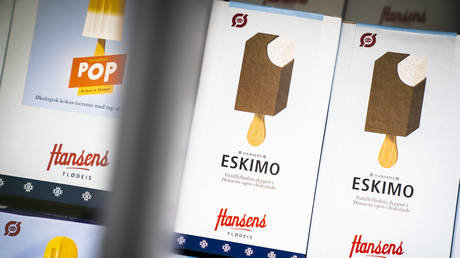