Danish Stram Kurs (“Hard Line”) party has staged a Koran-burning protests in an area of the town of Fredericia mostly populated by Turkish and Muslim immigrants. The stunt attracted a group of angry locals, one man was detained.

The activists, led by the party’s head Rasmus Paludan appeared in Fredericia on late Friday afternoon. While the protest was originally expected to take place at a local park, the group instead stood on a cordoned-off lawn by a local supermarket under watch of multiple police officers.

WARNING: SOME VIEWERS MAY FIND THE FOLLOWING VIDEO OFFENSIVE

The Stram Kurs members tossed around and burned several copies of the Koran, insisting the stunt was needed to send a political message.

‘What we are doing today is, we are telling the truth about Islam, because many people in Denmark don’t know what Islam is about, so we want to explain what Islam is about, and that the values and judgments of Islam are very, very in contradiction to Danish western European values,” Paludan stated.

The stunt has attracted a group of angry locals, who condemned the Stram Kurs’ activities. Footage from the scene shows one man detained by the police after he breached the cordoned-off lawn reserved for the provocative stunt.

The far-right party, founded back in 2017, has repeatedly engaged in similar stunts in Denmark, as well as in neighboring Nordic countries. The latest – and arguably one of the most ‘efficient’ – protests of the kind was held by the party late in August in Sweden’s Malmo.

Paludan himself was pre-emotively banned from entering Sweden for two years after he announced the Koran-burning event, yet his supporters proceeded with the stunt without their leader. The stunt prompted a very angry reaction among Malmo’s Muslim population, resulting in protests that promptly tumbled into outright rioting with blazing barricades in the streets and clashes.

While the Stram Kurs party is well known for its anti-Islam activism and Koran-burning events, its political achievements remain quite modest. The party did not manage to get any seats during any elections it took part in, failing to get past the 2 percent threshold during the latest general election in 2019. 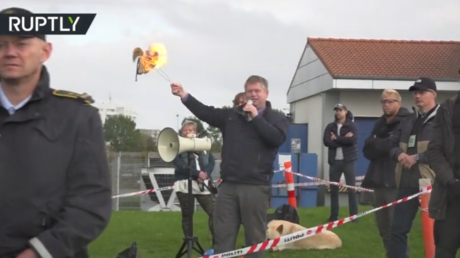