Holidaymakers from Denmark risk losing their jobs if they travel to countries with high Covid-19 infection rates this summer, with some 25,000 workers reportedly receiving letters warning of “employment consequences” if they do.

Employees of the Region of Southern Denmark are being urged “most strongly” not to travel to countries marked unsafe for coronavirus infections by the Danish Ministry of Foreign Affairs, such as Sweden and Portugal, according to local news outlet Jydske Vestkysten.

The letter states that journeys to high-infection areas may have abrupt consequences if, for example, they’re unable to come back to work due to a compulsory two-week quarantine. Such a journey would “be regarded as a material breach” of their employment, and may ultimately have “employment consequences,” the letter reportedly reads.

The HR director for the Region of Southern Denmark, Lene Borregaard, said the letter was an attempt at “transparent communication” to help its employees avoid “unpleasant surprises.”

Borregaard stressed that employees are free to travel anywhere they want – but they may face problems at their workplace if they have to go into quarantine after returning from their vacation. She said that “employees have an obligation to attend work after the holiday ends.”

On June 18, the Danish government presented a new set of criteria that will allow citizens from European countries with a low number of Covid-19 infections to enter from June 27. According to the number of current infections, Portugal and Sweden are the only countries in Europe still classed as high-risk regions for Danish travelers.

Portugal’s Foreign Minister Augusto Santos Silva has criticized the travel criteria, which demands countries have less than 20 infected per 100,000 inhabitants per week before Danes are permitted to travel freely there. The minister insisted that Portugal’s infection number is higher because it has conducted more Covid-19 tests than the majority of other European states.

While Sweden does not yet qualify for the relaxing of Danish travel restrictions, people from regions that have seen fewer infections than the capital will be permitted to enter Denmark soon.

Earlier this month, Norway and Denmark reopened their borders, creating a mutual travel bubble – but they excluded their neighbor Sweden, where the number of Covid-19 infections was much higher. Stockholm condemned the move as politically motivated and not justifiable from a health perspective. 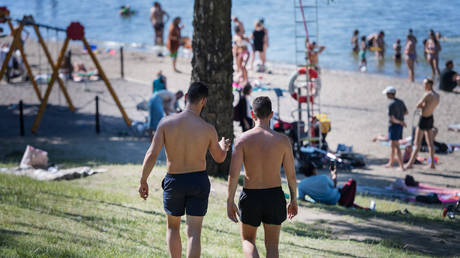