A day after the Czech government declared a state of emergency to tackle the coronavirus pandemic, the country reported a record daily new infections rate, which is now the fastest rising in Europe.

The Czech Republic recorded 4,457 new coronavirus cases in a single day on Tuesday, according to the Health Ministry’s latest data. Case numbers thave been growing exponentially with total figures now standing at 90,022 infections and 794 deaths.

The rate of new cases registered in the Czech Republic over the past two weeks has surpassed that of Spain for the first time, taking the landlocked nation to the top spot of the pandemic spread in Europe.

On Monday, Prime Minister Andrej Babis’ government gained new powers to tackle the virus after parliament approved a request to re-enter a state of emergency last week. The 30-day period will give the government more flexibility to introduce tighter rules on social distancing as well as further powers to shut schools in affected areas.

Closures of schools began ‘red’ and ‘orange’ districts began on Monday and restrictions were introduced on the number of people allowed in eateries and pubs, as well as at sporting and cultural events.

The country had already seen a number of measures introduced earlier in September, including the limiting of bar and restaurant opening hours and the mandatory wearing of masks in public places.

Despite the Czech Republic emerging as the largest pandemic epicenter, the government’s Covid-19 restrictions have faced some opposition from the public. On September 27, around 400 people gathered in Prague to show their resistance, demanding a choice on wearing masks and rejecting the imposition of other measures. One placard read, “we don’t want vaccines, we want freedom.” 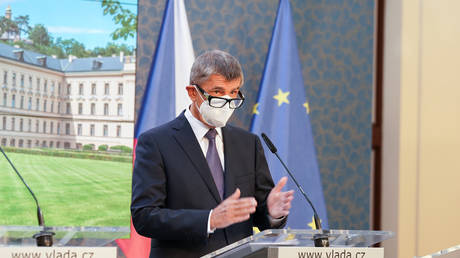