George Galloway has said Latvia’s decision to ban RT channels could be seen as a “compliment,” indicating that Western viewers are sick of watching and reading mainstream media and seeking out alternatives.

Latvia’s National Electronic Media Council (NEPLP) announced on Tuesday that it would prohibit seven RT channels from broadcasting in the country.

Galloway told RT that there is “no question” that the country’s authorities have been blinded by Russophobia in making the decision. Indeed, perhaps that blindness is so severe that it prevented the Latvian regulator from doing some fact-checking before announcing the move.

The NEPLP rationalized the ban by falsely claiming that RT is “controlled” by Dmitry Kiselyov, who is under EU sanctions. Kiselyov is actually the head of another news organization, Rossiya Segodnya — and has nothing to do with RT.

Galloway, a former British MP, said the move to prohibit RT broadcasting is a sign that Western people are “looking elsewhere” for news and that authorities in those countries want to shut down different perspectives, despite claiming to be committed to the ideals of free speech and media. It’s a “crisis of information,” he said.

The West has “coasted for the best part of a hundred years” on the myth that it stands for freedom of the press and that this distinguishes it from authoritarian societies.

Galloway, who hosts the show ‘Sputnik’ on RT, said authorities around the world are now all “dancing to the same tune” in an effort to stamp out competing voices because “nobody believes mainstream media” anymore.

In that sense, banning RT could be seen as a “compliment,” he said.

Galloway also suggested that some other EU countries might try to follow suit and “mimic” Latvia’s move, though such a scenario would require others to also disregard basic facts.

The International Federation of Journalists condemned Latvia’s decision on Tuesday, saying it “violates freedom of the press” and calling it a “clear act of censorship.” 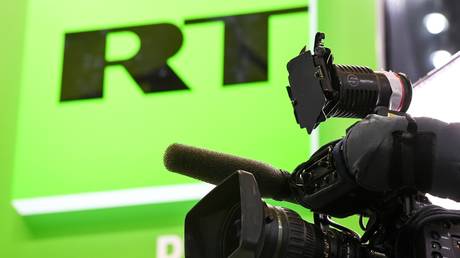