Close
Trending News
HomeWorldCrimes by US military must be investigated, Beijing says after reports that American troops fired on civilians after Kabul bombing

Crimes by US military must be investigated, Beijing says after reports that American troops fired on civilians after Kabul bombing

Crimes by US military must be investigated, Beijing says after reports that American troops fired on civilians after Kabul bombing

China’s Foreign Ministry has demanded probes be opened into numerous allegations of crimes committed by the US military against Afghans during the 20-year occupation of the now-Taliban controlled nation.

Speaking on Wednesday, Chinese foreign ministry spokesman Wang Wenbin was asked to respond to reports that US troops had fired on Afghan civilians following the suicide bombing at Kabul airport last Thursday.

The incident has claimed nearly 200 lives but reporters, including RT International correspondent Murad Gazdiev, have relayed accounts from eyewitnesses who claimed US troops fired at the crowds after the explosion, potentially causing more casualties.

Wang said Beijing was aware of the reports but claimed it would not be the first time the US military has been at the center of concerning events in Afghanistan. The spokesman then highlighted six events in which US troops had allegedly caused mass casualties or had harmed those in their care.

Among incidents noted by the spokesman was a US airstrike in 2002 which struck a wedding banquet in Uruzgan province, killing dozens and injuring many more. He also described a NATO attack in 2015 which, according to Wang, killed 15 police on an anti-narcotics mission, and a 2019 US drone attack that killed at least 30 Afghan farmers in Nangarhar Province.

Wang said that the number of civilian deaths caused by US strikes in Afghanistan far exceeds American estimates, adding that at least 47,245 Afghan civilians have been killed in the war launched by Washington two decades ago.

The spokesman insisted that all reported and alleged atrocities must be investigated, and the perpetrators brought to justice despite the fact that the US military has now withdrawn from Afghanistan. “This is about the international rule of law, international justice and the progress of human rights,” he added.

On Saturday, RT’s Murad Gazdiev reported that he had spoken to people who claimed US troops opened fire after a suicide bomber blew himself up by the Abbey Gate at Kabul airport. Some reports suggest US fire hit civilians, although this is not confirmed. “We can’t confirm that and we’re certainly not in position to deny it either,” Pentagon spokesman John Kirby told reporters on Monday. 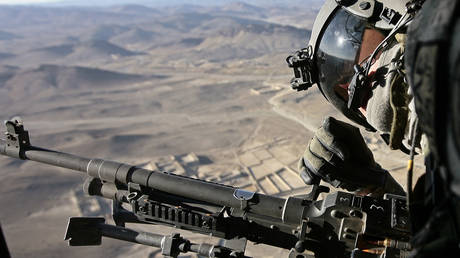