Covid drama: French waiter STABBED for turning Afghan man away for not wearing a mask

Covid drama: French waiter STABBED for turning Afghan man away for not wearing a mask

A harrowing assault has shaken France’s Le Havre, where a restaurant waiter received a grave stab wound for asking a customer to put his mandatory face mask on before entering a beachfront restaurant.

Wearing a face covering is obligatory in public places across France, but defending the rule, or reminding people about it, may spark a drama such as the one that occurred in the port city of Le Havre this Wednesday.

In the late afternoon, a 29-year-old Afghan man burst into a local restaurant overlooking a serene seaside beach. The visitor – drunk and not wearing a mask – was met by a waiter who “asked him to put one on,” local media reported, citing the police.

The brief altercation was apparently a prelude to violence. The man left the restaurant for a while before returning and stabbing the waiter with a knife.

There were some in the vicinity who could not stand back and watch the waiter bleed, it turns out. An off-duty member of CRS, France’s auxiliary police, intervened and apprehended the knife-wielding assaulter, but was also injured in the confrontation.Both victims were rushed to the hospital, with police saying the waiter’s wound was “serious” but not life-threatening. The suspect was arrested by police who launched a criminal investigation.

He isn’t alone in using violence to challenge France’s mask-wearing order. Earlier this month, a Parisian using a launderette said he was beaten by a pair of men with baseball bats after he asked a customer to put on a mask.

In July, a bus driver in the French city of Bayonne was assaulted by a mob after he reportedly demanded that they cover their faces and show their tickets before boarding the bus. The driver was left brain dead, prompting some of his colleagues to refuse to go to work in protest over the brutal attack.

France has recently moved to task riot police with enforcing mask-wearing, after a local spike in Covid-19 cases was reported in Marseille. The news comes as the country’s coronavirus tally surpassed 291,000, and over 30,500 people have so far lost their lives due to the pandemic. 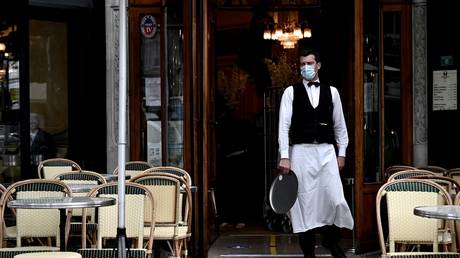