Close
Trending News
HomeWorldCovid-19 tears through mink population in Denmark: Up to 1 million to be culled as human transmission panic grows

Covid-19 tears through mink population in Denmark: Up to 1 million to be culled as human transmission panic grows

Covid-19 tears through mink population in Denmark: Up to 1 million to be culled as human transmission panic grows

Fear of animal-to-human transmission has pushed the world’s largest producer of mink products to order the slaughter of up to one million animals, as fur farms prove to be a hotbed of Covid.

The Danish government announced on Thursday that up to 100 mink herds must be culled to reduce the risk to humans. The cull applies to all mink herds where Covid-19 has been found as well as farms situated within eight kilometers (five miles) of a farm with infected mink. It is believed that all the affected mink farms are in the North Jutland region.

Minister of Food, Agriculture and Fisheries Mogens Jensen said they are taking the situation in North Jutland very seriously as cases multiply faster than elsewhere in the country.

It is a decision that will affect many people and animals. But the spread of infection has reached a point where we consider it to be such a serious public health problem that it will be necessary to kill the mink herds in the area.

Also speaking on Thursday, Danish epidemiologist Kare Molbak contended that “there is transmission from mink to humans,” noting that over the course of seven days, 96 people in the North Jutland towns of Hjorring and Frederikshavn have been found infected, which is well above the national average.

There have been similar outbreaks in mink populations across Europe this year. In May, the Spanish government demanded the culling of 92,700 mink at a single farm, having found that 87% of the animals were infected with Covid-19.

Despite culls earlier in the year, it was reported in September that at least 66 people linked to mink farms in the Netherlands had coronavirus. The Dutch government announced in September that it would be bringing forward plans to ban mink farming, with all producers ordered to shut by March 2021. 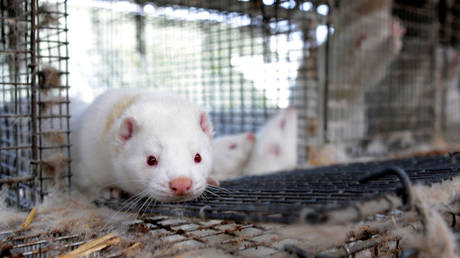