Covid-19 origin: Ex-Trump adviser Bannon claims West has ‘defectors’ from Wuhan & people will be ‘shocked’ at their revelations

Covid-19 origin: Ex-Trump adviser Bannon claims West has ‘defectors’ from Wuhan & people will be ‘shocked’ at their revelations

Donald Trump’s ex-adviser Steve Bannon has doubled down on the man-made nature of the coronavirus, claiming that Chinese “virus experts” have defected to the West and are now cooperating with intelligence agencies.

The explosive allegations were made by Bannon in an exclusive interview with the Daily Mail. Describing the Wuhan outbreak as nothing less than a “biological Chernobyl,” he pointed the finger at the city’s secretive laboratory as the source of the virus.

The facility has been “horribly run and terribly mismanaged,” Bannon claimed, adding that “it’s not that hard for these viruses to get out.”

“I know that certain defectors are working with the FBI here to try to knit together what happened” he said, referring to the Wuhan institute. And Western spy agencies “have electronic intelligence, and … have done a full inventory of who has provided access to that lab,” he claimed.

Said defectors have kept silent so far, yet when they actually go public, “people are going to be shocked,” Bannon said. He also suggested that, as the Wuhan facility was built with “French help,” it should have had some surveillance equipment pre-planted.

Not stopping there, Bannon concluded that scientists at the laboratory might have been conducting experiments that “they weren’t fully authorized” to do or they didn’t know what they were doing. As a result, be it through a mistake or via a lab technician, “one of these things got out.”

Bannon also played the usual US tune when it came to an alleged Chinese “cover-up” of the virus, insisting that Beijing deliberately withheld news of the outbreak that allegedly started late in 2019. At the same time, the former Trump adviser seemingly provided a safety net for his bold claims about the Wuhan institute, stating that, whatever the origins of the virus were – the aforementioned lab or a wet market – China is guilty by default.

The ‘blame China’ approach to handling the coronavirus fallout has been popular among Western politicians, with the US administration being particularly vocal about it. Washington has also accused the World Health Organization (WHO) of colluding with the Chinese authorities in covering up the outbreak.

Earlier this week, the WHO dispatched a team of experts to Wuhan to try to find the source of the disease. However, the team will only focus on the “zoonotic source” of the coronavirus and won’t probe allegations of its man-made nature – and that has prompted yet more criticism of the organization.

Beijing has firmly denied all the accusations of having covered up the outbreak, as well as claims of the laboratory’s involvement, insisting it has been as transparent as possible.

So far, no conclusive evidence has emerged to prove either Wuhan’s notorious exotic-animal market in Wuhan or its bio institute are behind the outbreak. Moreover, several scientific papers have cast doubt on the Chinese origins of the virus altogether. For instance, researchers from Italy and Spain, two countries badly hit by the outbreak, have discovered traces of the virus in wastewater samples taken well before the ‘original’ outbreak in Wuhan. 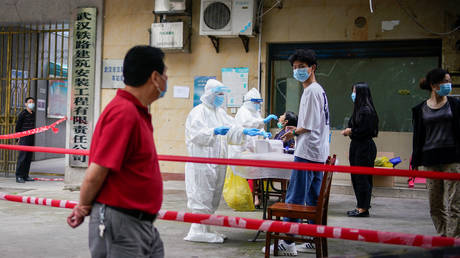