Coronavirus cluster at yet another German meat plant, where 82 workers test positive

Coronavirus cluster at yet another German meat plant, where 82 workers test positive

Another German meat-processing plant has become a coronavirus hotspot, after at least 82 kebab factory employees in the north-western city of Moers tested positive for Covid-19.

The first cases of coronavirus infections at the meat-processing company, which produces kebab skewers for takeaway shops, were reported on Wednesday. Initially, there were only 17, but after the district health authorities ordered a series of tests for the remaining 250 workers, that number had increased to 82 by Friday morning.

Wesel district officials said all of the factory’s employees, and all those who’d had contact with them, are now quarantined at home, while the plant has been ordered to halt production for at least two weeks. The authorities hope to avoid stricter lockdown measures, but as a precaution, have shut local daycare centers, although these were due to close for the summer vacation on Friday in any case.

“In order to prevent the further spread of the coronavirus in the Wesel district, I urgently recommend all citizens to abide by the known distance and hygiene rules, and to limit social contact as much as possible,” said District Administrator Ansgar Müller.

Germany had already suffered a cluster of new coronavirus cases, at Europe’s largest meat-processing plant, in the north region of Rhine-Westphalia, where 1,500 workers recently tested positive for the disease. The Toennies slaughterhouse was forced to suspend its processing operations, and approximately 7,000 workers were quarantined. The two surrounding regions had to close schools, museums, bars, and other public facilities in a bid to avoid any further spread of the virus.

Outbreaks in food-processing plants are being reported around the world, including in the US, Canada and the UK, which also recently saw mass outbreaks at meat factories in both England and Wales, with more than 450 employees testing positive for Covid-19. 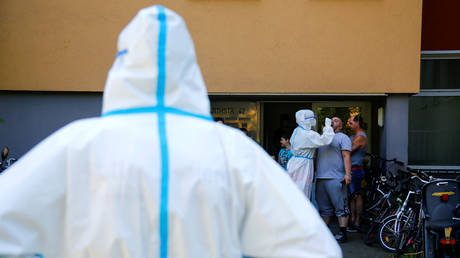