As the coronavirus heralds a new era of hand hygiene, fast food giant KFC has opted to pause the company’s trademark “It’s Finger Lickin’ Good” slogan, though the move has been widely panned online as completely nonsensical.

Effective from August 24, it is the first time the company has paused its slogan on such a scale in 64 years (though there was a 10-year hiatus in 2008 in the UK and Ireland).

The offending catchphrase will now be blurred out in stores across North America, parts of Europe, Asia, the Middle East and North Africa, having already pulled ads in the US back in March, when the pandemic was still in its infancy.

There were more than 150 complaints to the UK’s Advertising Standards Authority back in March, when KFC ran an ad campaign showing people licking their own, and each other’s, hands while eating the fried chicken.

“We find ourselves in a unique situation—having an iconic slogan that doesn’t quite fit in the current environment,” Catherine Tan-Gillespie, global chief marketing officer, said in a statement released Monday.

The pause is expected to last “for a little while,” though the company promised it would return “…when the time is right.”

The fast food industry is notoriously low-growth, low-loyalty, so anything goes as far as marketing ploys to get customers in the door, including what some found to be self-effacing and cringeworthy campaigns.

Grateful to the heart attack chicken restaurant for having the courage to take a stand for public health https://t.co/DcLnO7CTEs

“A #UnitedStates #FastFood chain that already hides its brand name behind initials, due to negative connotations, decides to now drop its famous tagline as also being inappropriate. @kfc is clearly #chicken in several senses of the word,” quipped one user.

Since the outbreak of the coronavirus in late 2019, health officials the world over have been pleading with people to wash their hands, wear masks and distance themselves from each other. The messaging has been so constant, that many responded to KFC’s stunning and brave decision with bafflement and derision.

“So licking your own fingers after eating the chicken you’ve just had your hands all over isn’t safe?” wrote one YouTube commenter.

“Wash the covid off your hands before eating chicken and licking your fingers,” echoed another sarcastically.

This is officially the dumbest thing I have seen today. But it’s early evening. I’m sure something will top it. Stupid seems fairly common these days.https://t.co/1R5e9pbVYq

Some even felt a boycott was the only appropriate course of action while others couldn’t believe it wasn’t satire or “a spoof.’”

KFC is pausing its slogan because it doesn’t want you to lick your fingers.

I needed this laugh, thanks @kfc https://t.co/dFWRLsiBbN 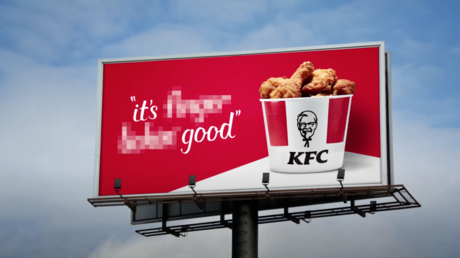