Things got out of hand in a Frankfurt square where thousands had been enjoying the summer weather and some beer on Saturday night. A number of revelers engaged in a violent fight, triggering a massive police response.

The mood was largely peaceful at the start of the evening but turned tenser as the night progressed. Some drinkers were caught on film flipping rubbish bins over, while others roamed around looking for trouble.

Shortly after midnight, a massive brawl broke out between dozens of people. The fracas quickly grew more violent, with one street fighter falling to the ground and lying motionless – at which point, police had to intervene.

However, when officers moved in, the crowd “openly and directly” turned their rage on to them, Frankfurt Police’s chief told reporters. They pelted them with bottles while some bystanders clapped, cheered, and yelled ‘ACAB’ – a pejorative acronym that stands for ‘all cops are b****rds.’

The police finally managed to quell the scuffle, having made 39 arrests. But the victory didn’t come without casualties, as five officers were injured and had to be rushed to hospital for trauma treatment, Frankfurt Police said, wishing their wounded colleagues well in a tweet.

Mass gatherings around the Opernplatz have created another headache for Frankfurt in recent weeks, too. The square, located at the heart of the historic downtown, is frequently piled high with garbage produced by the influx of thousands of partygoers.

The authorities have had to provide an additional 400 bins across the city, and to depend on the help of volunteer garbage collectors, who start cleaning up the area early in the morning. 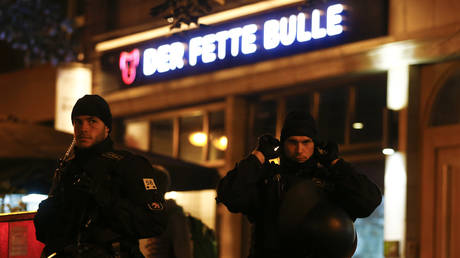