Fresh violent clashes in Myanmar have reportedly left 11 dead after anti-coup activists fought back against troops deployed to disperse protesters, a day after the military junta removed the country’s ambassador to the UK.

Myanmar news outlets reported that at least 11 people were killed and 20 injured on Thursday after clashes broke out in the northern town of Taze following the arrival there of soldiers sent to break up an anti-coup protest.

According to Myanmar Now and Irrawaddy, the fatalities occurred after pro-democracy activists attempted to push back against the deployment of troops, using weapons and firebombs to hold the town until military reinforcements arrived and managed to disperse the crowd. It is not clear if any security forces were injured or killed in the fighting.

A footage shows the brutality and inhumanity of the military junta group in Myanmar.#WhatsHappeningInMyanmar #MilkTeaAlliance pic.twitter.com/AWq97XYM1I

The violence in Taze occurred a short distance away from Kale, where witnesses claim 11 anti-coup protesters were killed after soldiers moved in to break up a demonstration on Wednesday, which called for the return of democratic rule in the country.

The new clashes in Myanmar come hours after the country’s ambassador to the UK, Kyaw Zwar Minn, was locked out of the London embassy on Wednesday night, after he called for Aung San Suu Kyi’s swift release, with his deputy seizing control of the building.

Small crowd holding a demonstration outside Myanmar’s embassy against the military coup in the country. It comes after the ambassador was sacked this morning pic.twitter.com/pjutUsxOIY

Myanmar confirmed that Kyaw Zwar Minn had been removed from his post in what the UK envoy called “a kind of coup.” The UK Foreign Office condemned the incident as “bullying” and accused Myanmar of “unacceptable and disrespectful” actions, with Kyaw Zwar Minn calling on Britain to refuse to recognise the military’s newly appointed representative.

The Myanmar military took control of the country on February 1, detaining civilian leader Suu Kyi and members of her party months after citizens handed them majorities in both of the country’s legislatures in November’s national elections. 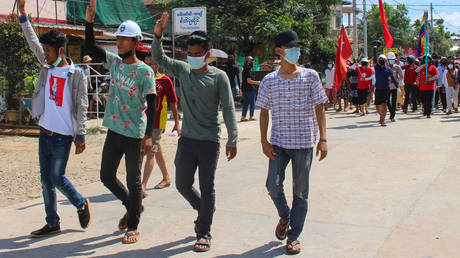