With the aid of the NASA/ESA Hubble Space Telescope, astronomers have captured a new photo of a collision in the IC 1623 galaxy system. The galaxy pair is in its final stages of merging, which will then create new star formations.

The collision of the galaxy pair featured as Picture of the Week for Hubble, captioned “Clash of the Titans” on Monday.

According to the Hubble astronomers, “this new image incorporates new data from the Wide Field Camera 3 (WFC3), and combines observations taken in eight filters spanning infrared to ultraviolet wavelengths to reveal the finer details of IC 1623.”

The IC 1623 galaxies are located very far from ours (the Milky Way), approximately 275 million light years away. The IC 1623 image documents how the two galaxies are in their final process of merging, a process that takes hundreds of millions of years to complete.

The astronomers commented on the galaxy pair, stating that one of the galaxies has a buildup of a warm, dense gas. The galaxy is also reaching its final stages of merging, which will result in a “frenzied burst of star formation in the resulting compact starburst galaxy.”

Astronomers will continue to monitor the galaxy pair to understand more about the processes of star formation in other galaxies like IC 1623.

The Spiral galaxy system, IC 1623, first discovered by American astrologer, Lewis Swift, in 1897 is located in the Cetus constellation near the celestial equator and is only partially visible at certain times a year.

The Cetus constellation is the fourth largest constellation in the sky and occupies 1231 square degree miles. Cetus is named after a sea monster and is also known as “the whale”. It’s neighboring constellations are: Aries, Pisces, and Aquarius. 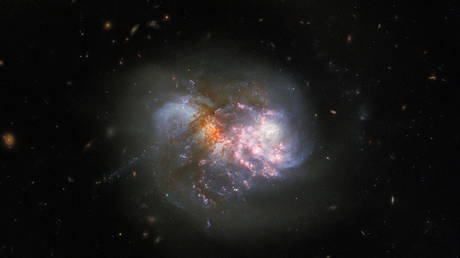 Britain joins US, EU and Canada to...