Update: The original video is no longer available on YouTube due to a copyright claim.

In the clip, posted on YouTube, Norris did not mention Lukashenko by name. Instead, he referred to him as “Sasha Zero-Percent,” which is a play on ‘Sasha Three-Percent’, the nickname opposition activists used to mock the president for his supposedly low approval rating.

Norris also used the phrase “Mister Cockroach,” a term coined by Lukashenko’s opponents to poke fun at his signature mustache.

“You know that when I slice onions, onions cry. So if you don’t stop what you are doing now, then I will come to one of your residences and make you cry,” Norris warned, without elaborating on his demand.

The bizarre video was reportedly produced through online platform Cameo, which allows users to pay for “personalized messages” from various celebrities. According to the website, a message from Norris costs $300.

Belarus has seen mass protests after Lukashenko was accused by his opposition of rigging last week’s vote in order to get re-elected for a sixth term in office. The anger against the authorities has only intensified after police responded to the demonstrators with brutal force. 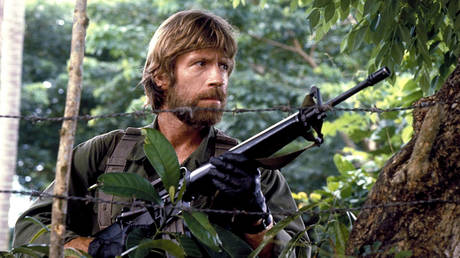