A London judge has ordered former British spy Christopher Steele to pay thousands of pounds in damages for not verifying the claims he included in his scandalous Russian dossier, which alleged Donald Trump’s ties with Moscow.

Steele was taken to court by Mikhail Fridman and Petr Aven, Russian bankers from Alfa Group, who contested one of the key allegations in the paper – that they were responsible for delivering “large amounts of illicit cash” to President Vladimir Putin in the 1990s.

Justice Mark Warby of the High Court of England and Wales ruled on Wednesday that Steele’s claim against Fridman and Aven was “inaccurate and misleading.”

Steele’s firm, Orbis Business Intelligence, violated British data privacy law as it “failed to take reasonable steps to verify the allegation,” and will now pay £18,000 pounds (around $22,600) in damages to each of the bankers, Warby said.

Fridman said in a statement that he was “delighted” with the outcome of the trial. He has insisted that the dossier’s claims that Alfa Group was somehow a link between the Russian government and the Trump campaign during the 2016 election were absolutely groundless.

“Ever since these odious allegations were first made public in January 2017, my partners and I have been resolute and unwavering in our determination to prove that they are untrue, and through this case, we have finally succeeded in doing so,” Fridman said.

Hillary Clinton’s campaign hired Steele, a former MI6 officer, through intermediaries in 2016 to dig up dirt on the rival presidential candidate. The dossier he eventually compiled included a range of bizarre allegations – from Trump’s team asking Russia for help with the election to the Kremlin blackmailing the Republican candidate with a video of him watching two prostitutes urinating on a bed in a Moscow hotel room.

The dossier made headlines in the US after being leaked to the media, but none of its allegation were ever confirmed. A lengthy and costly probe headed by Special Counsel Robert Mueller found that there was no collusion between Trump and Russia, while a major source for the dossier insisted that his words were “misstated or exaggerated.”

Steele himself admitted in 2018 that the whole purpose of the dossier was to provide Clinton with the basis to challenge Trump’s victory in the 2016 election. 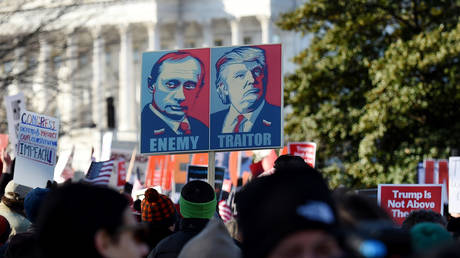 SECOND night of clashes in Serbia...