A top Chinese diplomat has delivered an unvarnished critique of Canberra, accusing the Australian government of damaging bilateral relations with Beijing amid escalating political and economic tensions between the two nations.

Wang Xining, China’s deputy head of mission in Canberra, expressed disdain at the notion that Beijing was exercising unwanted influence over Australian politics.

“I don’t see any reason for whining about your constitutional fragility and intellectual vulnerability,” Wang said on Wednesday while speaking at the National Press Club in the Australian capital. “We should not let a cold heart and a dark mind cast a shadow over our partnership,” he added.

His provocative remarks come after a Chinese company withdrew its bid to acquire an Australian dairy firm, after reports emerged that Canberra would block the deal from going through. Wang urged the Australian government to ensure that Chinese investors are given fair treatment, and compared the incident to a serious domestic dispute.

“A rift between husband and wife hurts one family, a rift between two countries hurts millions,” he cautioned.

China is Australia’s main export market, but bilateral relations have chilled following Canberra’s call for an international inquiry in the origins of Covid-19. Wang said it was a “shocking” proposal, especially coming from a “supposed” friend of China.

Last week, Beijing launched a probe into Australian wine imports, an investigation which Canberra has dismissed as baseless. China has also slapped tariffs on Australian barley and warned students and tourists to steer clear of Australia, citing alleged racial discrimination. 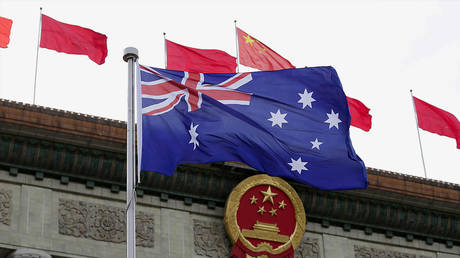