A Chinese court sentenced Sun Dawu to 18 years in jail on Wednesday after the billionaire was detained last November on charges that included “provoking trouble” and “gathering a crowd to attack state organs.”

The charges against the self-made billionaire were related to a land dispute between Sun’s agricultural firm, the Dawu Group, and a state-owned competitor.

He was detained by authorities back in November, along with 19 relatives and business associates, after Dawu employees tried to stop a government-owned enterprise from demolishing a company building in August 2020. According to a social media post by Sun, more than 20 people were injured in a clash with the police.

Sun’s legal team said prosecutors alleged that the Dawu Group acted deceptively toward its employees, interfering with the government’s administrative duties, and causing political instability. The billionaire has faced a slew of other charges,  including illegal mining and illegal occupation of farmland.

However, Sun reportedly claimed some responsibility for faults, including posting messages online and unspecified mistakes over the ‘land issue’. He said he wished to take the charges upon himself, even if severe, in exchange for the release of others.

Sun – a self-proclaimed ‘outstanding Communist party member’ – said in response to the claims against his firm that the Dawu Group was “wholly socialist, everyone is on the road to common prosperity, and Dawu employees live very well,” according to his team.

The billionaire’s lawyers said that the secrecy of the trial “violated legal guidelines and did not protect the defendant’s litigation rights.”

The land dispute is not the first time the pig-farmer billionaire has butted heads with the Chinese Communist Party (CCP).

In the early 2000s he ran a website that included criticism of state-owned banks, which he accused of neglecting rural investment while funneling rural residents’ savings toward urban projects.

In 2003, he was charged with ‘illegal fundraising’ after reportedly taking illegal deposits without approval from the People’s Bank of China. Instead, he solicited investments for his business from friends and neighbors.

After abandoning his appeals for the case, the sentence was suspended and Sun received probation.

More recently, in 2019, he criticized the government’s handling of the swine fever outbreak, publicly disputed the scale of the epidemic, saying it was far more severe than officials had said. He reported that about 15,000 pigs on his farms had died from the disease and posted photos of the dead animals online. 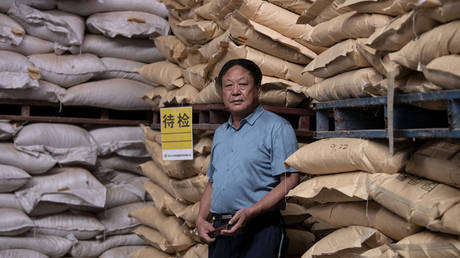 5 people missing after blast at Ge...