A two-shot coronavirus vaccine will be available for public use by the end of 2020, its manufacturer Sinopharm has announced. The price tag for the sought-after cure won’t be too high, the pharmaceutical company assured.

Sinopharm Chairman Liu Jingzhen has told the Guangming Daily newspaper that the firm’s Covid-19 vaccine has entered the third and final stage of clinical trials – during which the efficacy and safety of a new drug are tested on a large group of people with a disease or condition.

Sinopharm’s product is likely to be launched by the end of December 2020, Liu said. If so, it will mark exactly one year since the deadly virus was discovered in the city of Wuhan, the epicenter of China’s coronavirus crisis.

The announcement comes shortly after Beijing issued a patent for the country’s first vaccine, dubbed Ad5-nCoV. Developed by another biopharmaceutical firm, CanSino Biologics, it will enter Phase III clinical trials in Saudi Arabia and Mexico.

CanSino also reportedly hopes to start Phase III trials in Brazil, Chile, and Russia, which became the first country in the world to register a coronavirus vaccine last week. Named Sputnik V, the Russian vaccine is expected to be available to the general public starting in January. 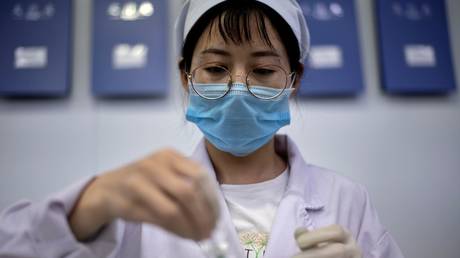