Beijing has confirmed it is taking steps to blacklist Taiwanese politicians who undermine “the interests of Chinese people” on both sides of the Taiwan Strait.

China is working on a blacklist of “diehard Taiwan secessionists,” Zhu Fenglian, spokesperson for the Beijing agency responsible for Taiwan affairs, said during a press briefing. She clarified that people who “provoke China’s sovereignty and territorial integrity” will be included in the list.

The aim of cracking down on secessionists and their supporters and paymasters is to safeguard peace and stability and the interests of Chinese people on both sides of the Taiwan Straits.

Beijing considers the island nation of Taiwan, which has been de facto independent since the late 1940s, to be its territory.

Chinese state-run newspaper the Global Times cited a source which said Su Tseng-chang, the head of Taiwan’s government, was on the blacklist. An unnamed Beijing-based expert told the paper that the list will include the “core members” of Taiwan’s ruling Democratic Progressive Party (DPP), and the members of “radical secessionist” parties and groups that push for Taipei’s independence.

Earlier this year, the Taiwan New Constitution Foundation submitted a petition calling for a referendum on drafting a new constitution that would legally solidify Taiwan’s status as a nation separate from Beijing. Zhu said at the time that such an effort would lead the Taiwanese people into “an extremely dangerous abyss and bring profound disaster.”

Relations between Beijing and Taipei have deteriorated in recent months, after the US authorized the sale of anti-ship cruise missiles to Taiwan. The island nation considers such arms deals crucial for its defense. Beijing, however, argues that the sale of weapons to Taiwan undermines peace and stability in the region. 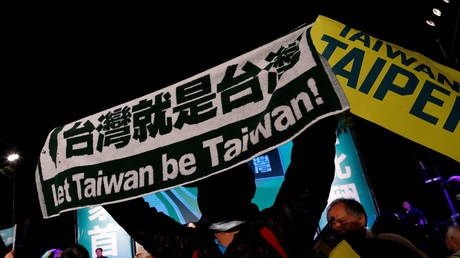