Beijing has warned that it won’t stand back and watch the UK grant citizenship to millions of Hong Kongers. If China’s opposition to the move isn’t heard, some “corresponding measures” will come into play.

PM Boris Johnson said earlier on Wednesday that if China pursues hotly-debated national security laws in Hong Kong, millions of its residents will be eligible for the British National Overseas (BNO) passport.

The passport currently allows holders to enter the UK without a visa for six months, but British immigration laws could be changed in such a way that overseas nationals would be able to stay in the UK for a renewable period of 12 months – and become British citizens in the future.

On Thursday, Chinese diplomats hit back at the PM’s promise, saying it was an affront to its sovereignty and a breach of London’s own agreements with Beijing. The UK had once declared that “it will not confer the right of abode to Chinese citizens in Hong Kong who hold BNO passports,” China’s Embassy in London recalled.

If Hong Kongers are allowed to emigrate en masse, it would breach the UK’s “own position and pledges as well as international law and basic norms governing international relations,” it added.

We firmly oppose this and reserve the right to take corresponding measures.

Ambassador Liu Xiaoming noted that nothing in the joint Sino-British declaration returning Hong Kong to China gives the UK “sovereignty, jurisdiction or right of supervision” over the former colony.

“Gone are the days when Hong Kong was under British colonial rule,” he tweeted.

Meanwhile, Foreign Secretary Dominic Raab acknowledged that there’s little the UK can do “to force China to allow BNOs to come to the UK.” Still, London will use “diplomatic leverage” to persuade Beijing against enacting the Hong Kong security laws.

As the diplomatic spat unfolded, thousands of Hong Kong residents took to the streets on the anniversary of the 1997 handover from Britain to China to decry the legislation which came into force on Tuesday night. The protests saw clashes with police who used water cannon, tear gas, and pepper spray against the crowds.

The protestors believe the legislation – which outlaws secession, terrorism, and collusion with foreign forces – will silence dissent and spell the end of Hong Kong’s special autonomous status. Beijing insists that it’s only looking to boost security and ensure stability in the region; and it has consistently demanded that nations backing pro-independence protests stop meddling in China’s internal affairs. 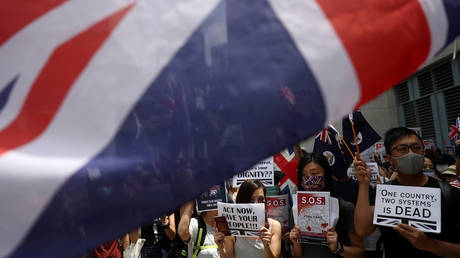 ‘Blow to US strategic superior...