China’s foreign ministry announced on Monday that it will bring a “necessary” response to bear after a senior US Navy admiral made an unannounced visit to Taiwan over the weekend.

Ministry of Foreign Affairs spokesman Zhao Lijian told reporters that China “resolutely opposes” any diplomatic or military relations between American and Taiwanese officials, calling on the United States to fully recognize the sensitivity of the China-Taiwan issue. Zhao warned that, depending on how the situation developed, his government would “make a legitimate and necessary response,” without explaining what specific action would be taken.

Rear Admiral Michael Studeman, a two-star Navy admiral who oversees US military intelligence in the Asia-Pacific region, is believed to be the officer that made the trip, according to people familiar with the situation. While the Pentagon refused to comment, Taiwan’s foreign ministry confirmed that a US official had arrived on Sunday.

If Studeman has visited the island, he would be the most senior US military officer to have been in Taipei in recent years.

This is the latest visit from a US official to the territory in the last couple of months. US Health and Human Services Secretary Alex Azar took a trip to Taipei in August and Under-Secretary of State for Economic Growth Keith Krach visited the capital in September. In response to each visit, China scrambled fighter planes near the island.

The Trump administration has clashed with China over the issue of Taiwan in recent months, approving a $1.8-billion weapons sale to the island and signing a memorandum of understanding on economic exchanges. While Taiwan claims to be a democratic, self-ruled island, Beijing believes the island is one of its territories and opposes any move that sees it engage in relations with other countries. 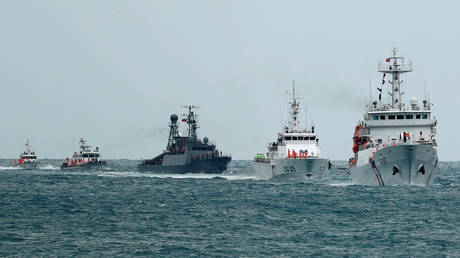 France to continue use of nucl...