A massive effort to contain a Covid-19 outbreak has kicked off in China’s city of Manzhouli after two locals contracted the disease. Apart from restrictive measures, the operation involves the testing of around 300,000 residents.

Strict quarantine rules were rolled out in the city on China’s border with Russia after two cases of coronavirus were detected on Saturday. Two residents, a sanitation worker and his wife, employed as a domestic aide, tested positive for the virus, yet it remains unclear where they managed to contract it from, local media reported.

Authorities launched a large-scale operation to contain the virus immediately after the diagnosis was confirmed. They sealed off recent locations that the couple visited, including a local police station, and disinfected them. Places visited by close contacts of the infected pair have also been sealed.

Access to the city – which is a major trade and logistics hub – and movement within it has been heavily restricted. All operations at Manzhouli bus and train stations have been suspended, while schools and other public places are closed. While the residents have not been placed under a curfew, they have been “encouraged” to limit their travel.

An ambitious plan to test all the residents of the city, some 300,000 people, is underway. Testing began early on Sunday and is expected to be completed within three days.

China has repeatedly introduced harsh and impressively large-scale measures over the course of this year to weed out detected clusters of coronavirus infections. The biggest one took place in the city of Wuhan, still widely referred to as the ‘ground zero’ of the pandemic that has plagued the whole globe throughout 2020.

Mounting scientific evidence, however, suggests Covid-19 was actually just first detected and identified in China, while the virus itself circulated across the globe as early as last summer, with the earliest traces of virus found in Spanish wastewater samples collected back in March 2019. 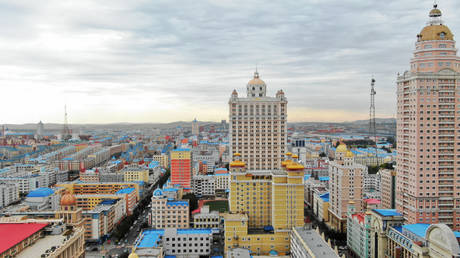 German FM lashes out at coronaviru...