Chinese authorities have announced that they will formally charge 12 anti-government protesters with border violations after they were arrested trying to flee Hong Kong in a speedboat three months ago.

Officials in Shenzhen’s Yantian district stated on Friday that “The investigation of 12 Hong Kong people who were found unlawfully crossing the border has ended,” allowing the court case to proceed.

The individuals have been held incommunicado in Shenzhen’s Yantian Detention Center since August 23, accused of unlawfully crossing the border and organizing an illegal border crossing, crimes that could see them sentenced to up to seven years in prison.

However, they are potentially facing a more significant charge of being separatists, which, in certain cases, can result in the death penalty.

A relative of one of the individuals detained has claimed that the legal process the detainees have been put through is not fair. Human Rights Watch claims that Chinese authorities have threatened the careers of lawyers who were hired by the families of the defendants, instead asking them to choose from a list of approved legal representatives.

The lawyer provided to the group by Chinese authorities has passed on letters to family members that claim conditions in the prison are good and they are being treated well, but family members have raised questions about whether the praise is genuine and the information accurate.

The 12 accused, aged 17 to 33, include activist Andy Li, who was arrested under Hong Kong’s new national security law for “colluding with foreign elements” about a fortnight before the attempted escape and was out on bail. The group was reportedly attempting to flee to Taiwan. 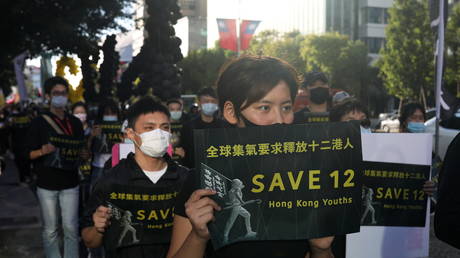 From airport to vaccination hub: B...

'He was tired and let himself...