Close
Trending News
HomeWorldChina tells 4.9 million people to quarantine in their own home amid fears of a Covid-19 resurgence near the capital

China tells 4.9 million people to quarantine in their own home amid fears of a Covid-19 resurgence near the capital

China tells 4.9 million people to quarantine in their own home amid fears of a Covid-19 resurgence near the capital

Chinese authorities have plunged the city of Langfang, on the outskirts of the capital, into lockdown, as case numbers rise and fears of a second wave grow.

On Tuesday, Langfang City in Hebei Province introduced a series of new measures to contain the spread of coronavirus, including the imposition of a seven-day ‘stay-at-home’ order for all of the city’s 4.9 million residents.

Xu Jianpei, deputy governor of Hebei Province told a press conference on Tuesday that the decision to adopt lockdown measure in Langfang City had come after a single case was registered on Monday.

“Langfang City began today to start nucleic acid testing for all workers. Inspection sites in Langfang City will communicate with other cities while 24-hour inspection, prevention and control will be started. People and vehicles shall not go out unless necessary,” Xu stated.

The announcement follows similar moves in Hebei Province’s capital Shijiazhuang, Xingtai City and two counties, Guan and Sanhe, in Langfang’s jurisdiction, both of which border Beijing.

Hebei Province has been at the center of a new outbreak of Covid-19 in China.

On Tuesday, authorities in Beijing’s Xicheng district said that the confirmed Covid-19 case from Guan county works at a building in the district.

Xu Hejian, deputy director within the Beijing city authority, told reporters that the key to beating the virus was “staying focused” as the city introduced a number of measures to restrict movement to and from the capital. 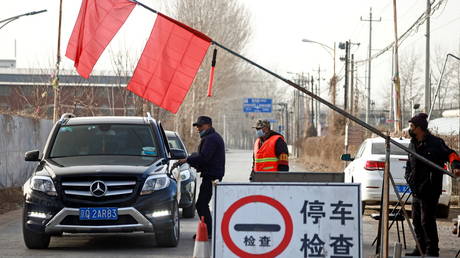